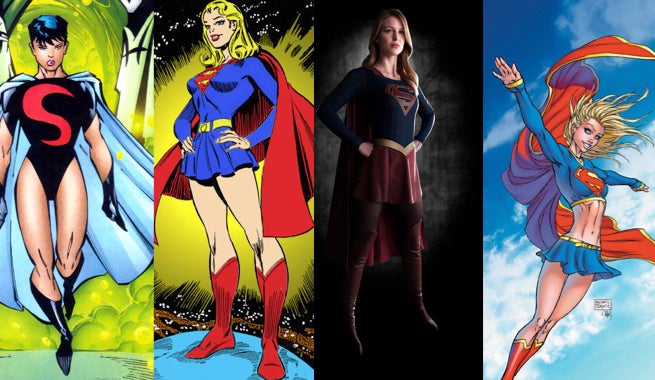 Next fall, CBS will introduce millions of viewers to Supergirl, Superman’s cousin from Krypton. While she appears to have a simplistic origin, Supergirl has a convoluted history with multiple versions appearing throughout the years. But just how many Supergirls are there? To help you sort out the Girls of Steel, here’s a list of every Supergirl to appear in DC Comics.

[Note: This list only notes Supergirls who have appeared in “in-continuity” comics.]

While the first “official” Supergirl wouldn’t be introduced until 1959, DC had two proto-Supergirls that appeared in Superman stories during the 1940s and 1950s. The first Super-Girl to be introduced was Superboy himself, transformed into a girl by an alien after he made disparaging comments about the female gender. Jimmy Olsen wished the second Super-Girl into existence after he discovered a magic totem. Both Super-Girls appeared only once in the comics.

DC’s first version of Supergirl was Kara Zor-El, the cousin of Superman. Kara’s Kryptonian home, Argo City, survived the initial explosion of Krypton but faced a slow death as the ground underneath it turned into kryptonite. In desperation, Kara’s parents constructed a rocket similar to the one that sent Kal-El to Earth and sent her to Earth to be raised by Superman.

Supergirl became a popular character at DC and gained a massive following after her first appearance. Much like Superman, Kara had her own share of wacky adventures during the Silver Age, including one time where she unknowingly made out with her talking horse, Comet. In 1985, DC decided to kill off Kara Zor-El in order to re-establish Superman as the last survivor of Krypton. Supergirl died in the Crisis on Infinite Earths event series protecting her cousin from the evil Anti-Monitor. .

Kara’s busty doppelganger from an alternate universe, Power Girl first appeared in the 1970s as the Earth-Two version of Supergirl. Earth-Two was the world containing the Golden Age versions of DC’s superheroes and often crossed over with DC’s modern “Earth-One” heroes. With a more confident attitude and a…fuller figure, Power Girl was a key member of the Justice Society and Infinity Inc. prior to the Crisis on Infinite Earths merged Earth Two and Earth One together.

Post-Crisis, Power Girl gained a new origin as DC had decided to make Superman the sole survivor of Krypton. Power Girl was revealed to be the descendent of an ancient Atlantean wizard, who had sent her forward in time to get impregnated with a demon seed and give birth to the “perfect being” (comics in the 1990s were weird). Power Girl also had adopted a sticky one eyed cat who other Justice League members would unsuccessfully try to bathe. DC eventually undid the changes to Power Girl’s origins, making her the cousin of Earth-Two’s Superman shortly before he returned in the 2005 event series Infinite Crisis. Power Girl reappeared in the New 52 as a survivor of Earth-Two initially stranded in the main DC universe with Batman’s daughter, the Huntress. 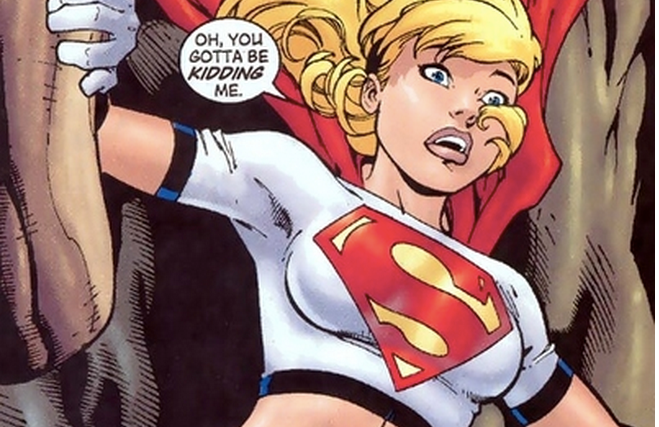 Probably the most confusing of the Supergirls, writer Peter David created Linda Danvers as a supernatural version of the Supergirl character. Danvers was an ordinary human who gained her powers when her demon worshipping boyfriend slashed her throat during a sacrificial rite. When a passing Matrix Supergirl used her shapeshifting abilities to save Danvers, the two accidentally merged together to become the new Supergirl. Danvers had many of the previous Supergirl’s powers and quickly discovered she also had angelic abilities such as fiery wings and the ability to shoot flames from her eyes. Danver’s time as Supergirl was convoluted, with adventures involving ancient vampires, demons, and travelling back in time to marry Superman and having his daughter. After DC retired the character in the early 2000s, Peter David used a very similar character, Lee, as the star of his creator owned series Fallen Angel and hinted that Lee and Danvers were one and the same. 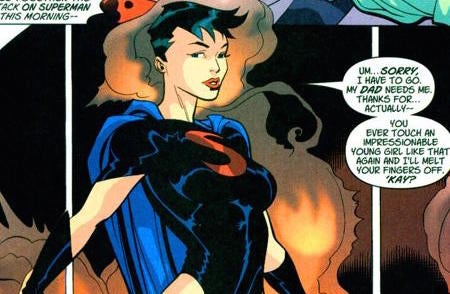 DC’s most obscure Supergirl, Cir-El appeared in 2003, claiming to be the daughter of Superman and Lois Lane from the future. Cir-El had the same superstrength and speed as Superman, and could also shoot red solar energy from her hands. Cir-El was later revealed to be an unknowing pawn of Brainiac, created by him as part of his latest plot to take over Earth. Cir-El only appeared in a handful of comics, making her the briefest recurring Supergirl character. 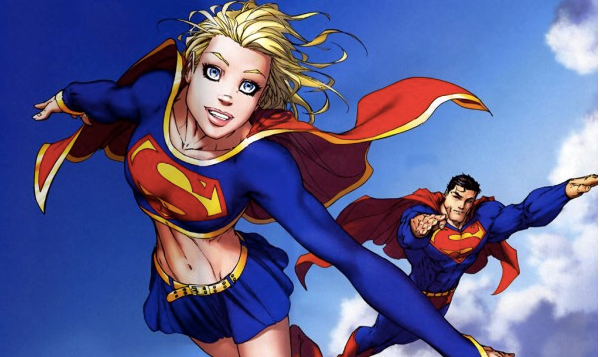 Twenty years after killing the character off in Crisis on Infinite Earth, DC brought back Kara Zor-El in the pages of Batman/Superman. This version of Kara Zor-El ignored the character’s previous appearances in comics, allowing her to meet Superman and the rest of the DC Universe for the first time. Kara first appeared in the wreckage of a giant kryptonite meteor that was headed to earth. After she was discovered by Superman, Kara was trained by Batman and Wonder Woman on how to be a hero. Much of Kara’s time one earth was spent learning about her new home and how to be a superhero. This version of Supergirl was the main version of Supergirl who appeared in DC comics from 2004 up to DC’s relaunch in 2011. 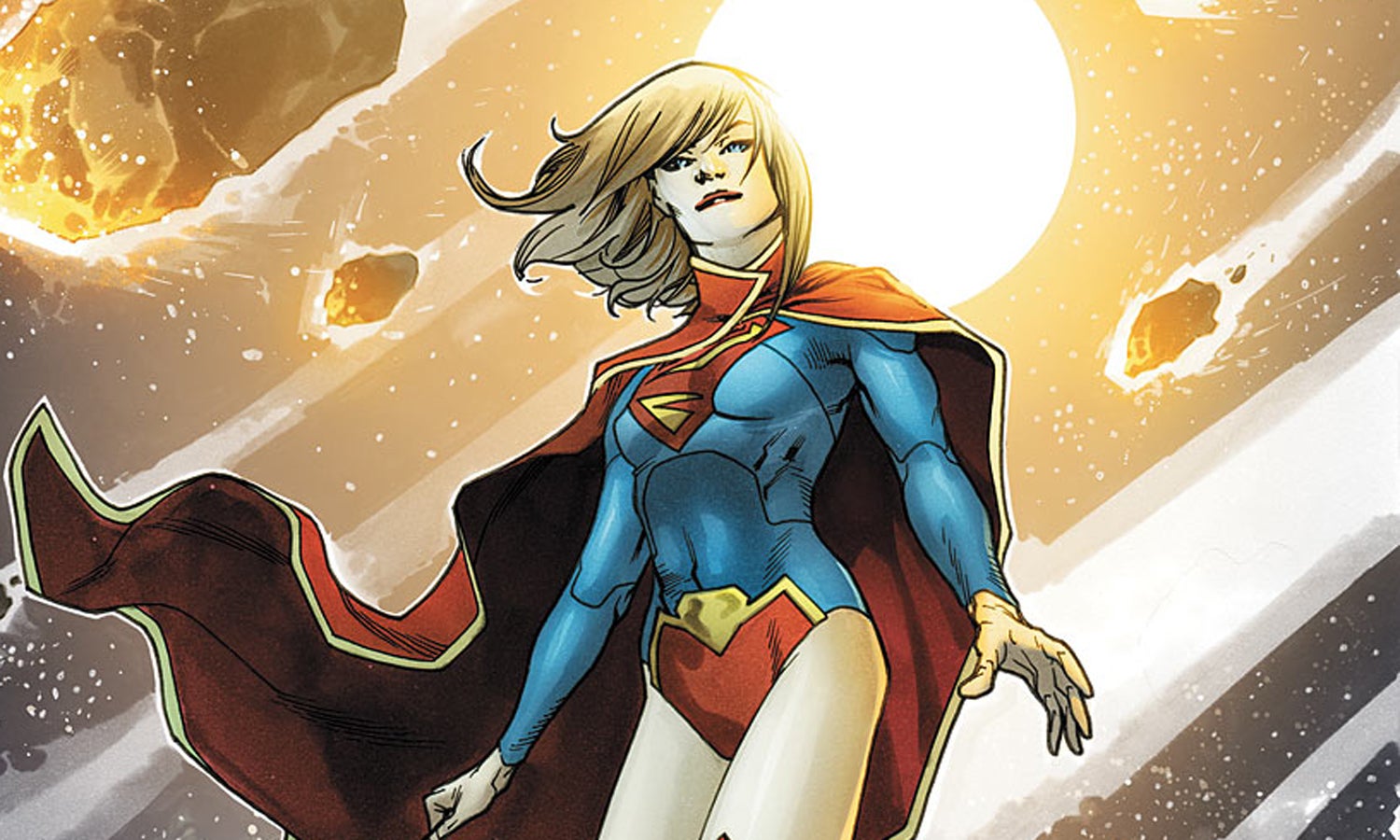 DC’s newest version of Supergirl is a modified version of Kara Zor-El, Superman’s cousin from Krypton recently arrived on Earth. The New 52’s Supergirl series started with Kara’s arrival on Earth and meeting Superman. This version of Supergirl was much angrier and mistrusting than past versions of Supergirl and only accepted Superman as his cousin after fighting him across most of Asia. Supergirl joined the Red Lantern Corps for a time and now appears in Jeff Lemire’s Justice League United series.

Which Supergirl is your favorite? Leave your thoughts in the comments below!

Just How Many Supergirls Are There?