With Star Wars: The Force Awakens hitting Blu-ray this week, Marvel Comics also launched a supporting product. As the first character from the film to get his own comicbook, let alone an ongoing series, Poe Dameron's importance is clear. As the high-flying pilot played by Oscar Isaac on the big screen makes the transition to panels and pages, writer Charles Soule knows that getting this right from the start means making sure he knows Poe in and out.

Soule, already a veteran Marvel Comics Star Wars storyteller with Lando and Obi-Wan and Anakin on the shelves, told Comicbook.com in an exclusive interview that getting "details like Poe's voice" took a good three viewings of the film, mostly because on his second time he "got sucked into the story again and didn't take any notes." Viewings three and four are when he started to truly prep for the task at hand.

"I made a lot of notes about what I think are his primary qualities (charisma, leadership, easy confidence in his own skills, a bit of a jokester) and went with that," Soule told us. When it came to writing the scripts for his first arc of the comicbook, he took an extra step. "I definitely did my “Poe pass,” once I was done with the first draft, to make sure it all sounded right. That's probably my main job on this book. If I can get Poe sounding right, the rest will follow."

Luckily, he has artist Phil Noto on hand to help make this feel every bit the Star Wars story that the films do. 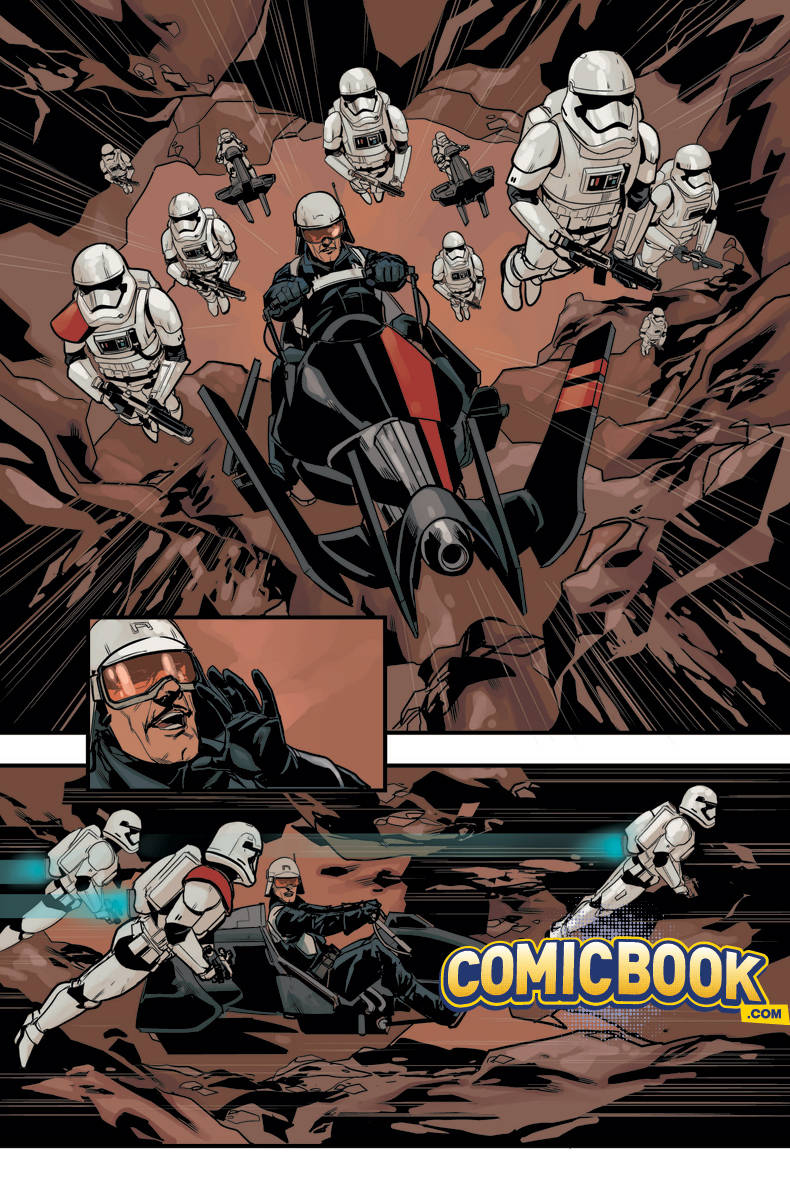 "Phil’s art is just unreal. It’s Star Wars all the way," Soule says, praising the artist who has also worked on the Chewbacca mini-series for Marvel, as well as drawing covers for several Star Wars novels. "We’re working to give readers an experience that doesn’t duplicate The Force Awakens, but feels cut from the same rich cloth."

Part of every good Star Wars story is a great villain, but the first issue doesn't actually introduce the big bad of the arc at all, something that Soule says is absolutely intentional.

"People are buying this book for Poe (as well they should). I wanted to make the first issue as focused on Mr. Dameron (and BB-8) as I could," the writer explains. "But don’t worry – we’ve got an amazing villain coming up in Issue 2, who will be the main antagonist for the series (at least for a while). His name is Agent Terex, and it turns out that he’s the best." [You can see your first look at Agent Terex in the exclusive art below.]

Speaking of BB-8, Soule has "tons of plans" for the adorable ball droid.

"There is no scene that can’t be improved by the addition of BB-8. I actually write real dialogue for the little guy in the scripts, which doesn’t make it to the final comic, of course – that’s the bleeps andbloops," he says, though he cautions that's for creator eyes only. "I just put it in so my incredible collaborator on the book, Phil Noto, can get a sense of the intent of any given scene. Most people will never see it (probably for the best – BB-8 can get a little saucy.) Really, though, I just write him as an incredibly, earnest, resourceful and helpful little dude who gets into and out of a lot of scrapes. I actually find him easier to use than I expected – BB is one of my favorite parts of the book so far." 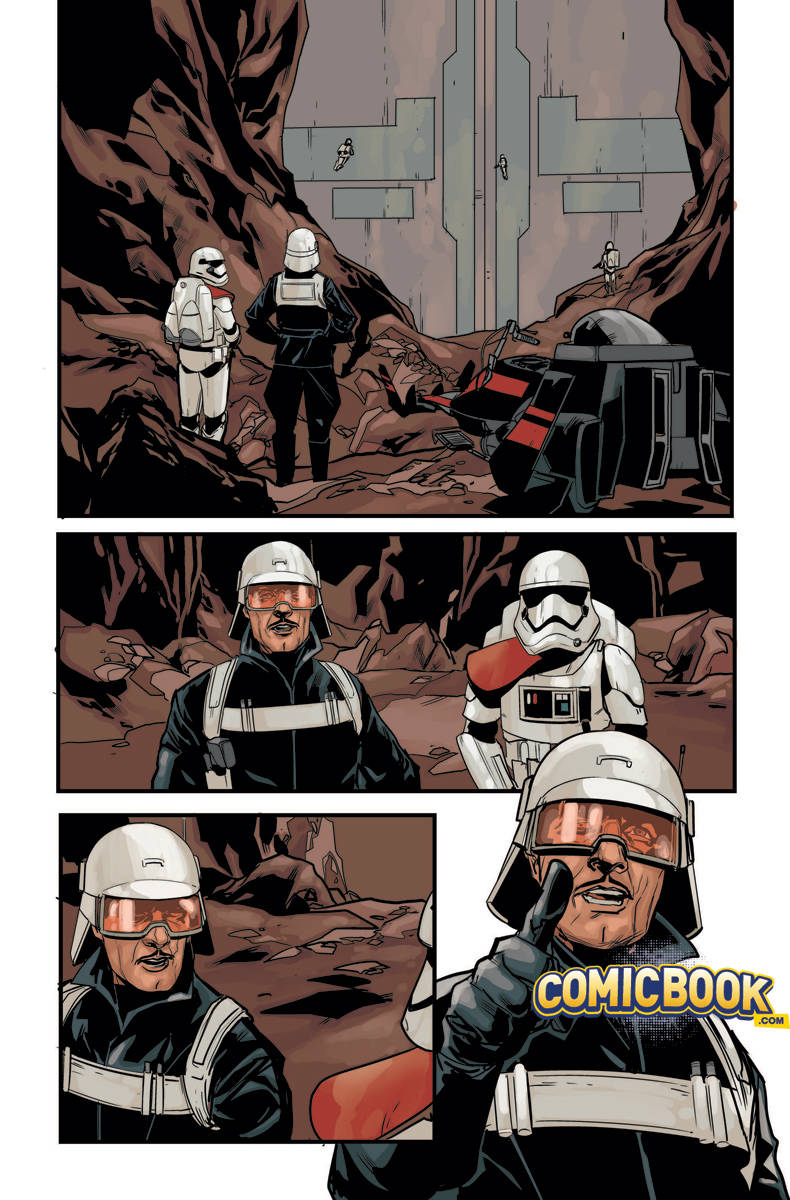 General Leia will "always [be] a presence" in the book, a character Soule was "thrilled" that he got to use. The book's focus, however, will stay on Poe, and "to a lesser extent Black Squadron and Terex." For those connections, and nods to moments like the "Battle of Jakku" and characters like Snap Wexley, Soule has the Star Wars Story Group to call upon.

"Generally speaking I can propose whatever connections make sense to me, and then I’m fortunate to have the Story Group to let me know when something I might want to do doesn’t work with larger continuity or just doesn’t feel right," he explains. With comics, novels, tv shows, and films to pull from, Soule teases that elements from many of those will be found in Poe Dameron. "This book pulls in storytelling from the films, the Tarkin novel, Jason Aaron’s Star Wars comic series, and much more. I love that stuff – using elements from the Star Wars “stew” is one of my favorite parts of the job."

While he's already written in the Prequel and Original Trilogy eras, the newer timeframe of Star Wars is different, primarily because he "hasn't been living with it for over a decade." Still, the creator finds it "a fascinating challenge," and says that writing Star Wars comics "feels like a job [he's] been studying since before [he] was in kindergarten."

Ultimately, Poe Dameron in the comicbook will have things in common with his character in The Force Awakens, but will also be growing towards that, as the book takes place ahead of the film in thetimeline. "What will he discover? What will humble him?"Soule teases. "We have lots of great cameos planned, and some amazing setpieces. We’ve been planning and working on this book for a long time, and I just can’t wait to see what people think."

Poe Dameron #1 is in stores now from Marvel Comics, and can also be found online digitally at the Marvel Digital Comics Shop.