HBO and the producers of its hit show Game of Thrones have apologized for having used a prosthetic George W. Bush head (albeit one in a long-haired wig) as one of a number of disembodied heads standing on pikes during the show's first season finale. In spite of the episode airing more than a year ago, the controversy erupted earlier this week when bloggers seized on comments made by showrunners David Benioff (X-Men) and D.B. Weiss on the episode's DVD commentary. 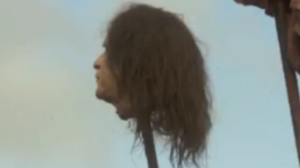 "George Bush's head appears in a couple of beheading scenes. It's not a choice, it's not a political statement. We just had to use whatever head we had around," they said on the disc, noting that the expense of the show and the budget limitations they faced forced producers to use not only heads, but all manner of body parts from whatever prosthetic bodies that HBO and their prop masters could get hold of.

In a joint statement made by the network and the producers, HBO said, "We were deeply dismayed to see this and find it unacceptable, disrespectful and in very bad taste. We made this clear to the executive producers of the series, who apologized immediately for this inadvertent, careless mistake. We are sorry this happened and will have it removed from any future DVD production."

Between Internet blowback and what sounds like a very tense conversation with HBO (already facing scrutiny from conservatives over their recent adaptation of the bestseller Game Change, which was harshly critical of onetime GOP Vice Presidential candidate Sarah Palin), the producers were forced to apologize. They implied that (perhaps because of the wig) nobody had noticed it was President Bush until it was too late to do anything about it, and that perhaps it would have been better if they had never mentioned it on the DVD. They also assured fans that future editions of the DVD would be modified so that the head (and, presumably, the offending commentary track) never appears.

"We use a lot of prosthetic body parts on the show: heads, arms, etc. We can't afford to have these all made from scratch, especially in scenes where we need a lot of them, so we rent them in bulk. After the scene was already shot, someone pointed out that one of the heads looked like George W. Bush," Benioff and Weiss said in their statement. "In the DVD commentary, we mentioned this, though we should not have. We meant no disrespect to the former president and apologize if anything we said or did suggested otherwise."

The DVD broke sales records for HBO, according to The Hollywood Reporter. It sold 350,000 units in its first week of release, a remarkable number probably bolstered at least somewhat by the fact that premium, pay-cable networks are often the last holdouts who don't yet make their new episodes available weekly via iTunes, Amazon or some other service prior to the release of the DVD.

Game of Thrones Producers Apologize After George W. Bush's Head Ends Up on a Pike