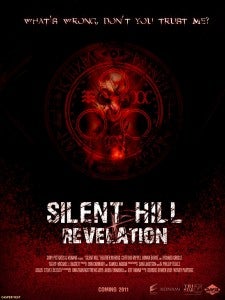 At the San Diego Comic Con, one of our featured writers was lucky enough to sit in on the Silent Hill  Revelation 3D panel where the actors, writer, and director teased at things we could expect from the long anticipated sequel to 2006 film Silent Hill.  The original film was loosely based off of the original PlayStation game of the same name while at the same time, adding its own twists and re-imagining of the world and characters.   And though the films key villain and minions were killed, it ended on a note that promised more.

Just recently we have been able to see the full trailer for the new film and we are now faced with more questions than ever regarding where exactly the film is heading.  By looking at it, it is very obvious that the film is heavily based off of Silent Hill 3.  But anyone who has both played the games and seen the original movie (as I have), the question becomes how are they going to intertwine these similar but very different takes of the stories.    So here are 5 questions that seeing the trailer for Silent Hill Revelation 3D has raised:

1)  What in the world happened to Rose?

The biggest change the original movie made was changing the game’s original main character, Harry Mason, into the female protagonist of the movie Rose Da Silva.  We watched as this desperate mother tried to solve the mystery of her daughter’s strange condition and later, the mystery of the strange town that was Silent Hill.  The movie ended on an ambiguous note hinting that her daughter had joined together with her two halves and more darkness was on the way.  Flip to the trailer where we now see a teenaged Sharon (now called Heather Mason) in the care of her foster father from original film Christopher Da Silva (now Harry Mason).   So again, the question begs what happened to Rose?  It’s very evident from the trailer that she is nowhere to be found.  And even in the interviews, it has been stated that “Harry and his daughter” have been on the run; not any mention at all of a mother.   So did she die in an event to escape from this new darkness?  Or worse, is she stuck in the hellish Otherworld of Silent Hill?  For her sake, hopefully the first.

2) What role does Pyramid Head play?

Pyramid Head first appeared in Silent Hill 2 as a monstrous hunter that tormented the protagonist of the game, James Sunderland.  He was an instant hit the minute he debuted and became the key mascot of the series (not to lower the popularity of Robbie the Rabbit).  So it wasn’t a surprise when he appeared in the Silent Hill film where he showcased his brutality and monstrous blade.  Pyramid Head himself is used as a "weapon" of punishment.  He's either a manifestation of one’s own guilt and need to be punished, or summoned by someone who has been wronged and seeks punishment for the crimes committed upon them.  So when he appeared in the movie, many speculated that he was a manifestation of Alessa’s anger and a physical incarnation of her need for vengeance; which is why he hunted and killed anyone that wandered the streets of Silent Hill.  But with the complete destruction and annihilation of the Cult, his role should be completed.  But in the trailer, we very clearly see Pyramid Head in all his glory both pulling the gears of the Otherworld carousel and swinging his massive Great Knife.  So why is he there?  Who has summoned him?  And more importantly, what does he want with Heather?

3) How will Alessa’s role fit into the film given the context of the movie and games?

Anyone who has played the games and seen the movie know the key differences of the two Alessas.  In the game, she is portrayed as the entity that is trying to birth the god and destroy the world where in reality she is the one trying desperately to stop it.  In the movie, she was an innocent girl nearly murdered by a crazed cult.  In her near comatose state after her near fatal burning, she used her psionic powers to create a dark manifestation of herself to exact vengeance on the town and the people within it.    But at the end of the film, she got her revenge and it should have ended there.  But we saw something that seemed that the two different Alessas, Dark Alessa and Sharon, the “pure” Alessa, had merged and were finally one being.  So what does that mean about the Dark Alessa we saw walking down the street, seemingly destroying the town around her?  Is it simply a flashback to the time where she started taking her revenge on the town?  Or something relating to the “God” mentioned in the trailer?  And with the sighting of the dark carousel, we have to wonder if this is where Dark Alessa will come face-to-face with Heather like they did in Silent Hill 3.

4) What roles will Dahlia Gillespie and Claudia Wolfe play?

In the game, Dahlia Gillespie was the main antagonist.  She was the one who was willing to sacrifice her daughter’s body and soul to bring about a “God” that would destroy the world.  In the movie, she was a more sympathetic character that had been tricked into handing her daughter over in an ill attempt to put her and Alessa in a better light to the town.    In the game, she died and in the movie she was left to live with her guilt.  But it is very clear in the movie that Heather stumbles upon her real mother while traversing the Fog World.  Her character will more than likely be reduced to nothing more than exposition but her stark contrast in character from her video game counterpart is what will affect the person who appeared in only a single shot of the trailer but who is clearly recognizable by any fan of the game.

In the game, Claudia Wolfe was a disciple of Dahlia and a near sister to Alessa.  She joined the Order with her father when she was a small child and soon became one of the most ardent believers in their twisted religion.  And as she gained control over the Order, she took it upon herself to complete the work Dahlia had started.  But how does she relate to the story in the movie?  The answer may lie with the next question.

5) With the appearance of a strange box engraved with symbols and filled with arcane artifacts, who is the group that held this and what is their purpose?

In the trailer, we see Heather find a large wooden box engraved with arcane symbols.  Inside, one of the items she finds is a strange medallion with an even stranger engraving.  So where did this box come from?  And who was in possession of it to begin with?  In the original film, we saw the Cult wiped out entirely.  So that can only leave us to assume that there is another group that has formed and that it is them that have been hunting Heather and her father.  Based off of playing the game, we can only guess that Claudia is in charge of the group but given the storyline of the movie, how did they come about?  How long have they been around?  What are their connections to Heather?  And most importantly, what plans could they possibly have that would make them hunt six years for one single girl?  For those that have played the game, we can guess based off of what we know.  But based off of past experience of seeing how writers can take something we know so well and give it a twist we couldn’t see coming, all bets are off.

These are only a few questions and I’m sure there are more I haven’t even thought of.  I guess we’ll just have to wait and hope that we get a few more hints before the big reveal this October.  In the meantime, check the chilling trailer below and see if you have any more questions.  Or even better, answers.