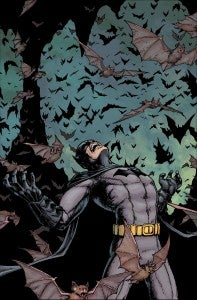 writer Grant Morrison told an interviewer today that he doesn't believe Damian Wayne, the Robin recently killed in action in Batman Incorporated #8, will come back from the dead anytime soon--but if he does, it won't be Morrison who does it.

With four issues left following the death of the character, who was introduced in the first arc of Morrison's run on Batman, many fans have speculated that Morrison might actually resurrect Damian via the Lazarus Pit or some other means. Whether or not we'll actually see him in the Robin costume, even the people who believe he's coming back can't agree on.

Morrison can't deny that in comic books, the dead rise all the time--but he says that if that happens in Damian's case, it won't be him that writes it.

"[A resurrection] wouldn't bother me at all, if it was done well and if someone really had a good idea for it.

"But I don't imagine that's going to happen for awhile.

"It's certainly not going to happen in my story. So all the people that are hoping for a happy ending for Damian can forget it.

"But other writers? That kind of thing is beyond my control and beyond the scope of my story. There are always possibilities.

"We try to close down a lot of possibilities before I leave. So the idea of Lazarus Pits and things kind of gets raised in the next issue."

Grant Morrison is Definitely Not Bringing Damian Wayne Back