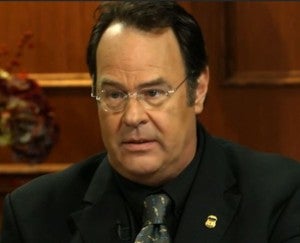 In a new interview on Larry King Now, Dan Aykroyd has revealed some of the plot details for Ghostbusters 3. And while every other month seems to bring a new rumor over if Bill Murray will participate, Dan Aykroyd said Murray is not currently part of the movie.

Aykroyd said, "He's a good friend, I love him, but he just doesn't want to reprise the role. However, there will be a hole for him. If Billy wants to walk in the door and be in the movie, we will find a place."

While Bill Murray might not have an interest in Ghostbusters 3, Larry King said he would love to be a part of the movie. Aykroyd responded, "It's absolutely obligatory. Of course, you're going to be in the film."

As far as the plot of Ghostbusters 3, Dan Aykroyd said, "It's based upon new research that's being done in particle physics by the young men and women at Columbia University." Aykroyd added, "Basically there's research being done that...I can say that the world or our dimension that we live in, our four planes of existence, length, height, width, and time, become threatened by some of the research that is being done. And ghostbusters, new ghostbusters have to come and some the problem."

Star Trek Returns to the Kelvin Timeline in The Unsettling Stars