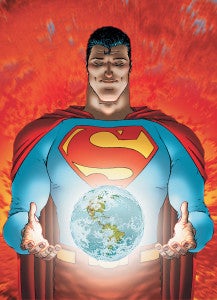 With Man of Steel set to hit theaters in less than a week, comics, movie and entertainment sites all around the Internet have been writing "The Best Superman Stories Ever Told" articles.

We even took a similar task on here at ComicBook.com, penning an article that supplemented DC Comics's own internal list of what was essential reading before you saw Man of Steel.

Well, we thought it was time that somebody asked you folks--the average readers, and what we found when we reached out to our fans on Facebook, Twitter, Google+ and around the Internet was that there was some consensus as to what stories were truly great--but hardly unanimity.

Bear in mind that these findings are hardly scientific. We basically took a day, took a bunch of our fans, and said, "Quick! What's the one that comes to mind?". 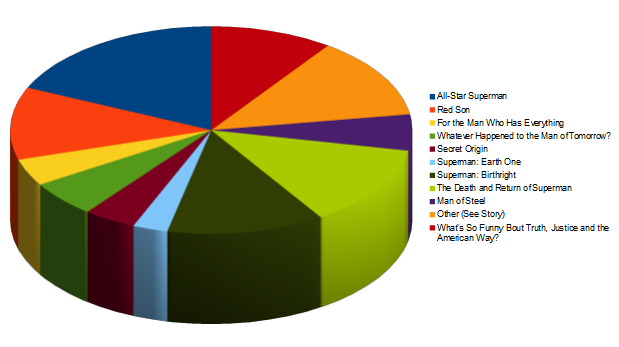 Please excuse the crudity of this model. I didn't have time to build it to scale or paint it.[/caption]

You can see a chart above to get a sense for the most common answers (click to enlarge), which include All-Star Superman, The Death and Return of Superman, Superman: Birthright, Red Son and The Man of Steel...but you'll notice that the "top responses" include a number of books and then there's an "other" category that gives us a pretty good chunk of the overall total.

(by Birthright writer Mark Waid), Superman and the Legion of Super-Heroes (and basically every other story Geoff Johns wrote), Emperor Joker and Superman: Peace on Earth. Other stories include The Death of Clark Kent, The Trial of Superman, Secret Identity, H'El on Earth, New Krypton, Bizarro World, Bizarro's World, The Black Ring and The Dark Knight Returns.

Then there were some of the odder, more surprising answers that seemed worth sharing if for no other reason than because there's a good chance that if these weren't your answers, you might not have read them yet.

"The one from the 1970s where it turns out Clark Kent's glasses were made from Kryptonian glass, which caused him to emit a subtle super-hypnotic effect on everyone who looked him in the eye, making him appear smaller and meeker."

"Just because I found it to be a really interesting what if, the Armageddon 2001 stories that dealt with him dealing with Lois dying. The one that gave us another Batman/Superman showdown, and the other one with Maxima."

"I really like some of the silly Silver Age gimmicky stories and that one where he ends up alone on earth under a red sun. "All-Star Superman" hits all the right notes and has a lot of heart. That Alan Moore story a lot of people cite is awesome as well. But my favorite is Action Comics #500 where they build a Superman museum and Lex Luthor secretly clones him in seconds and then starts using his memories to give the clone a mind. It's not the best story, but it's got some fantastic Curt Swan art and DC really made that comic feel like an event in the era before all the marketing schemes in place of storytelling."

The Greatest Superman Stories, According to Our Readers

Keep Your Hands Off Eizouken is Anime's Newest Viral Hit