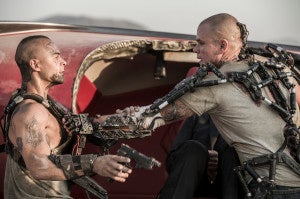 Overall moviegoing is up significantly over the same weekend last year, as four different movies opened with between $15 and $35 million.

Elysium, the Matt Damon/Jodie Foster space adventure film, is expected to take the #1 spot for the weekend with $30.5 million, while the Jennifer Aniston comedy We're The Millers takes #2 with $25.7 million. Disney's Planes, a spinoff of the Disney/Pixar Cars franchise, made $21 million while its sequel, Planes: Fire & Rescue, was being teased at D23 and Percy Jackson: Sea of Monsters rounded out the new releases with a $14 million weekend.

Both Jackson and Millers got early starts on Wednesday, meaning that by the time the weekend was over We're the Millers had generated just over $37 million and Percy Jackson: Sea of Monsters had just shy of $23 million in the bank.

Percy Jackson & the Olympians: The Lightning Thief opened at #3 back in 2010, and while it only made back $88 million of its $95 million budget, the perceived value of the franchise and close to $140 million in international ticket sales were enough to merit a second film, at a slightly reduced budget. That film opened at $31 million domestically and was an adaptation of the first installment of the Percy Jackson young adult novels--currently there are eight books in the series. Whether we'll see more films will likely again hinge on the international market.

Planes, meanwhile, is an interesting story. It began its life as a direct-to-video feature but was reportedly promoted to a theatrical release after Disney Animation's John Lasseter fell in love with an early cut. It's got at least two planned sequels already, which are supposedly angling for a theatrical release as well, although obviously if this movie doesn't do the kind of money they're hoping those could easily turn into direct-to-video or Disney Channel movies. The film is opening at a fraction of Cars 2's $66 million (the most recent installment of the franchise), but it also reportedly cost $50 million to make, whereas Cars 2 had a budget of $200 million.

Elysium is an original, sci-fi property from District 9's Neil Blomkamp, and everything is  a bit downsized from the last big sci-fi movie we saw from a star "genre" director, Pacific Rim. The film will make between $5 million and $10 million less than Pacific Rim in its opening weekend, but is generally being heralded as a success, whereas entertainment reporters largely characterized the $37 million opening for the monsters-versus-robots movies as a disappointment. The difference is partially the budget--Elysium's $115 million means it might make its money back domestically, whereas Pacific Rim had to turn to the international market for salvation from a $200 million budget. Many studios continue to have a "rule of thumb" philosophy that the U.S. market is where you should make your money back, so that international revenue can be straight profit, and that attitude is reflected in the entertainment press, who have been hearing that philosophy for years. 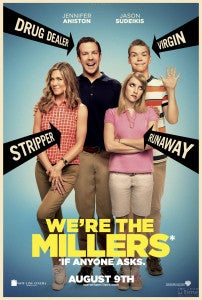 With more than $35 million in less than a week for Millers, it may be time to start giving Jennifer Aniston some credit, too; conventional wisdom for the last couple of years has been that if you're not Angelina Jolie, Sandra Bullock or Melissa McCarthy, there aren't any female leads guaranteed to deliver. Last year, the Friends star took some time off from A-list features, but in 2011, she had a pair of movies which each opened around $30 million and made more than $100 million during their run, in spite of comparably small budgets ($80 million for Just Go With It, which made over $103 million, and $35 million for Horrible Bosses, which made $117 million).  That's about in line with movies like McCarthy's Identity Thief.

Movies like that also represent a victory for the kind of mid-budget comedies that used to be pretty common in Hollywood, but which are getting more and more rare in a time when studios feel the need to fill every week of the summer with at least one blockbuster designed to make $200 million-plus. Iron Man 3 star Gwyneth Paltrow has said that such movies used to be her bread and butter, but that movies like Shakespeare in Love and Shallow Hal would likely have a hard time getting made in Hollywood today.

If, as has been predicted by everyone from Steven Spielberg to George Lucas, we continue to have a few disappointing big-budget films every year, we could see more of these types of films starting to make their way back into the development pipeline as studios consider them a safer return-on-investment.

2 Guns, The Smurfs 2 and The Wolverine, three comics adaptations that took the top spots last week, fall right into line for the #5-7 spots respectively this week, each making between $8 million and $11 million.