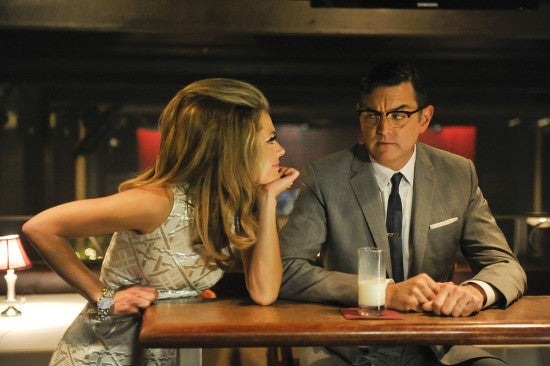 The episode opens with Shawn, Gus, Juliet and Lassie walking through the police department, excited about a memo...

...Chief Vick is back, but only to say good-bye. She's leaving for San Francisco. As she's explaining why it's the right decision for her, Shawn, Gus and Juliet all go in to give her a hug--Lassiter joins only after she assures him that he's on the shortlist for her job.

Parting ways with O'Hara is the hardest; the pair hug again, and get tearful, and then Vick tells her to take a seat. 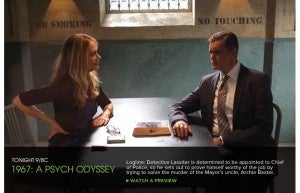 When Lassiter goes to the interview, though, while the mayor is rambling about his uncle--"the only father I ever knew"--whose murder in 1967 went unsolved becuase of corrupt cops, Lassiter spills water all over himself and sees himself out of the failed interview. In the elevator outside, though, he's struck with an idea and when he gets back to the station he recruits Shawn, Gus, Juliet, Henry and Woody to help him solve the cold case.

Flash back to 1967, when the coroner--here played by Corbin Bernson (Henry) is giving the body a semi-competent rundown. When it turns out the victim--a teetotaller--was listed as being drunk at the time of his death, Lassiter becomes convinced they have something.

Lassiter takes Shawn and Gus to the local newspaper, where the victim--a crime reporter--has a small box of personal effects still in storage. In it, he finds a photo that Shawn says shows a couple of drunk cops, coming out of a reputed mob bar.

Flash back to 1967 and the victim--a crime reporter played by Lassiter--takes the photo to the chief of police--played by Woody. He confronts him about it but the chief just kicks him out of his office.

In the present, Lassiter heads to the nightclub. The four split up, with Shawn and Juliet going in one direction and Gus and Lassiter going in another. Juliet asks Shawn why he's so enthusiastic to help Lassiter, and Shawn tells her it's because she'll get promoted to head detective if he gets the chief of police job. She's unsure. 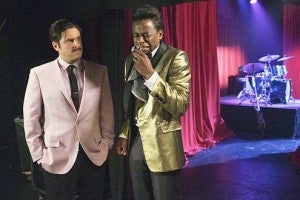 Lassiter finds a photograph on the wall of the nightclub that shows the '67 chief of police hanging out at the bar. Shawn and Gus get preoccupied looking at the famous people in photos.

Cut to the club in '67; Gus is playing the musician on stage and Shawn is playing a mob capo who goes to see the chief of police at a booth where he's drinking with friends. Juliet is playing Shawn-Capo's girlfriend; the crime reporter is there, too.

There's nothing useful there, and they need to find a person who's alive to talk to. When they find one of the singer's backup dancers--one of the only people alive--she tells them that the police chief was actually not dirty, but was trying to pressure Miles (the singer) for information on Caruso (the mobster). Miles gambled some of the mobster's money away but didn't get killed becuase he was under Caruso's thumb and Caruso's girlfriend loved his music.

Shawn finds a photo of Miles in the dancer's dressing room that proves a car seen at the scene of the crime belonged to him, and Lassiter becomes convinced that he's solved the case. Lassiter takes the evidence to the mayor--but the mayor tells him that Miles was arrested on the night of the murder in another city.

Shawn, examining the original photo from outside the nightclub again, notices that Caruso's girlfriend Scarlet Jones is parked outside of it in a car (something he didn't notice before because he didn't know who she was until the photos in the nightclub). She's still alive, so they bring her in for questioning. 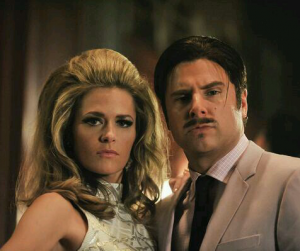 She tells him that the crime reporter was a deadbeat drunk.

Flash back to '67 and Archie (the reporter) is after one of the backup dancers, drunk and stumbling, according to Jones. She says the dancer in question was a lesbian and wouldn't give Archie the time of day.

Lassiter, convinced now that Jones is telling the truth and that there was no murder--that Archie simply drove drunk, despondent over his failed crush.

Lassiter, sleeping, is visited in a dream by Archie's ghost, who tells him that he was indeed murdered and to avenge him.

At the morgue, Lassiter visits Woody to ask whether there's anything else that could have accounted for Baxter's level of intoxication. Woody says there was no sign of alcohol in the man's system after all, but instead barbiturates.

Lassiter calls Shawn and Gus back to the nightclub, where Shawn finds a secret entrance in the back office. It leads to an antechamber with a second office, where he finds that there was a tap on Caruso's phone. The next morning, they head to the mayor's house to get a look at Archie's belongings. In them, they find an audiocassette. On it, Scarlet is telling the singer that Baxter is around asking questions. Caruso's girlfriend didn't just like Miles's music--she was having an affair with him.

Scarlet, knowing that she would be killed if Caruso found out, drugged Archie's drink and then bumped him off the road in Archie's car. They present their findings to the mayor, who brings in Lassiter the next morning for a second interview. He immediately promotes him to chief in the office--then sits him down and tells him that there are conditions to the job.

Lassiter heads back to the office, where he is met with applause from the rank and file. O'Hara opens the door to his office, where she's all giddy for Lassiter. He isn't happy, though, and closes all the blinds to his office. He has cold feet about the job, though; Juliet is going to be transferred while the mayor flanks Lassiter with his own people. He delivers a moving speech about how important Juliet is to him, and that he won't take the promotion if she can't get the promotion she deserves, too. Juliet tells him that just knowing he would make the sacrifice for him gives her all the clarity she needs--she's going with Vick and Lassiter can be chief. They hug.

Back at her house, Juliet tells Shawn about her decision. The pair talk about whether he's going to come to San Francisco--she wants him to come when he's ready, but she's starting to panic. He calls her over to the bed and tells her that he'll help her to the car when the alarm goes off. He tells her they're going to do whatever it takes for their relationship.

The next morning, he wakes up and Juliet is already gone, making her way up the interstate.