Things aren't going so well in the City by the Sea, and Wintermute is doing the best she can to save as many as she can in the newest issue of Animosity: Evolution from AfterShock Comics.

The odds are quite stacked against Wintermute at the moment, which is understandable when you have a massive octopus with robotic legs cornering you on one side and a vicious dog named Leopold on the other. Unfortunately, it doesn't help when Leopold plans an ambush, taking a massive chunk out of Wintermute in the process.

Wintermute isn't one to give up of course, and despite suffering a massive wound is still ready to take her enemies on. Unfortunately, the numbers game is hard to overcome, and that task becomes even more difficult thanks to Wintermute losing her arm. In short, things are rather grim, but we're sure Wintermute has a truck or two still left under her sleeve.

You can check out the full preview in the gallery and the description below.

"The chaos and paranoia in the City by the Sea to a fever pitch as conspiracy and assassination open the gates to civil war. Desperate to save what little order remains, Adam races to prevent genocide as the Animals and humans alike walk into a trap that could destroy all they have worked for and all they have saved. 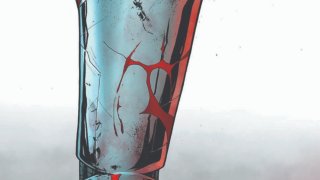 From the brilliant mind of creator/writer Marguerite Bennett (INSEXTS, Bombshells Batwoman) with artwork by SHIPWRECK’s Eric Gastur, ANIMOSITY: EVOLUTION is an exciting new series that expands on this already amazing world!"

From the brilliant mind of creator/writer Marguerite Bennett (INSEXTS, Bombshells Batwoman) with artwork by Eric Gapstur--ANIMOSITY: EVOLUTION is an exciting new series that expands upon this already amazing world!"

So what did you think of the preview? Let us know in the comments!

The Book of Boba Fett: First Merchandise From Star Wars Spin-Off Out Now