BPRD will draw to a close in 2019, with BPRD: The Devil You Know #15, and ComicBook.com has exclusive first details about the series' conclusion.

The announcement comes on the heels of issue 10 of the series, which revealed that Rasputin is the big bad who has been pulling the strings for quite a while. Longtime readers know that this ties the end into the beginning and brings the story of BPRD full circle.

"So here we are at last. For years I’ve known how the B.P.R.D. series would end. I wasn’t sure exactly how we would get here or how long it would take but I always knew in the end we’d have to get the original gang back together — including Rasputin," series creator Mike Mignola told ComicBook.com. "It was important to me that for the ending we would circle back around to where we started 25 years ago with Seed of Destruction. It’s a little sad but also very exciting to be here at last."

Dark Horse Comics will continue to publish Hellboy and the BPRD, but the solo stories will conclude with #15, which hits the stands in early 2019. 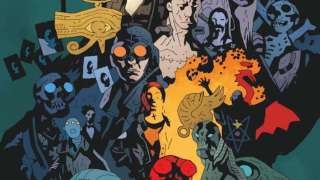 Mignola's series have become mainstays of the Dark Horse publishing line, with Hellboy becoming the publisher's most recognizable hit.

With a feature film coming soon, Hellboy is celebrating the aforementioned 25th anniversary with some style. Fans can also raise a glass of Hellboy-branded whiskey to toast the end of BPRD if they are so inclined.

While no art has yet been created for BPRD: The Devil You Know #15, you can check out a print created by Mignola for this week's New York Comic Con, which you can buy at the Dark Horse panel.

Mignola will also be at New York Comic Con, so if you get this limited-edition print, you can get it signed while you are there.

Also in the attached image gallery, you can check out a BPRD timeline that goes back 25 years of publishing history and even further than that within the world of the story, breaking down the most important moments in BPRD history.

Exclusive First Look at the End of BPRD

My Hero Academia Deals a Deadly Reminder About Midnight

Did Mortal Kombat 11 Just Subtly Hint at Next DLC Character?