This year is the year of Tank Girl, and we've got your first look at Titan Comics' Tank Girl All Stars #1.

2018 is the 30 year anniversary of the popular character, and there's no better way to celebrate such a grand occasion than bringing back some of the artists that helped define her for so long and teams them up once again with Alan Martin.

Tank Girl All Stars will feature artwork from Brett Parson, Chris Wahl, Ashley Wood, Philip Bond, Jim Mahfood, and Mick McMahon, and you can get a look at the first four covers for All Stars #1 below.

The four covers here feature work from Brett Parson (Cover A), Ashley Wood (Cover B), Chris Wahl (Cover C), and Alan Martin (Cover D), and you can get a look at all four int eh gallery.

Tank Girl All Stars will be just one part of the Tank Girl celebration, which Titan Comics is calling the Year of Tank Girl. In April fans will be able to pick up Tank Girl: Full-Color Classics 1988 - 1989, the first of six prestige editions that present the original Tank Girl strips in color. Titan will also release The Way of Tank Girl, a hardcover book full of Tank Girl's "most personal and bonkers brainwaves, musings, and secret weaponry." Alan Martin joins up with Jamie Hewlett, Parson, and Wood to collect a series of strips, poems, covers, and other pieces from the last 30 years of the character. 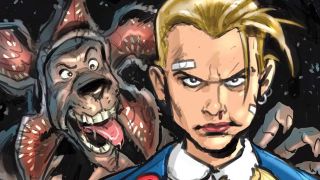 Fans can also celebrate the character on Free Comic Book Day, which will feature a special issue called A Brief History of Tank Girl, collecting stories from her pasts. In June fans can also buy The Wonderful World of Tank Girl in collected format, and in August you can purchase an all-new bumper collection called The Legend of Tank Girl.

You can find the official description for the Tank Girl All Stars miniseries below.

AN ANTHOLOGY OF STORIES FROM CREATORS OLD AND NEW, CELEBRATING THE 30TH ANNIVERSARY OF TANK GIRL!