The war for the Psiots continues in Valiant's Harbinger Wars 2 #3, and we've got your exclusive first look.

Fans got a surprise at the end of the last issue when Bloodshot found Tama the Geomancer at the heart of the ship but in this new preview of the issue that isn't the only thing fans discover. Bloodshot didn't plan on fighting a child when he boarded the ship, but he'll soon learn she is far more deadly than she initially seems.

Of course, to be fair, this is Bloodshot we're talking about here, so if anyone can absorb some punishment it's him. As you can see in the preview, he certainly lives up to that reputation.

Also just as fair warning, but prepare for your heartstrings to get a pull if you've read Tama's previous adventures in other series like Rapture. That first page hits awfully hard, and we can't wait to see what the rest of the issue has to offer.

You can check out the new preview and the official description below, and our review of Harbinger Wars 2 #2 can be found here.

"All hands on deck!

Divided but not yet conquered, Livewire and the Harbinger Renegades are making their last stand for the fate of their fellow psiots! Targeted by X-O Manowar and the governmental forces of the H.A.R.D. Corps, the most powerful players behind the cataclysmic conflict that has torn America asunder are about to converge in a violent conflict where the ultimate fate of the Valiant Universe will be decided… And Ninjak and Bloodshot are about to get a crucial new role in the heart of it all! 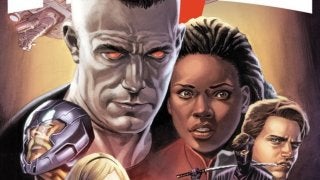 The Boys: Vought Releases Statement After Starlight's Livestream Calling Out the Company

Who Dies in Stranger Things 4 Part 2?