Big things are on the horizon for Ninjak, and he'll be getting help from some of Valiant's finest starting in Ninja-K #6.

That arc is called The Coalition, where Ninjak will form his own superteam in response to a group of Valiant's deadliest villains forming a team of their own. Ninja-K writer Christos Gage sat down with ComicBook.com to talk about the new arc, including what part the Ninja Programme will play in the blockbuster story.

"There is a MAJOR figure in Ninja Programme history who is a key figure in this arc...but now he's out on his own," Gage said. "We're going to look at the question of what happens when someone in the Ninja Programme defects to another side..."

This is quite the team Ninjak has formed, which includes heroes like Livewire, Punk Mambo, Dr. Mirage, and GIN-GR. Gage was excited to use all of these heroes, but there is one in particular that stood out the most.

"They made sense for reasons that will become clear when the villains are all revealed, and they've also worked for the U.K. and U.S. before," Gage said. "I am excited to write Dr. Mirage because I loved her series. And GIN-GR, because who can resist a giant robot with an emoji for a face? Giant robots are totally my jam, going back to Red Ronin and the Shogun Warriors."

Previous issues have revealed the feelings Ninjak and Livewire have for each other, though there has been some strain there recently. The good news is that there will be more movement on that particular subplot, with Gage teasing "Signs point to 'hell yes.'"

Being on the same page in their personal lives will only help Ninjak and Livewire on the battlefield, and they'll need it against this all-star villain lineup. Why they have come together is a mystery, but at least you'll have the Deathless to keep you occupied until that mystery is solved.

"The question of what draws the antagonists together is a central one that I won't be spoiling here…but yes, it is indeed awesome! Undead walking skeletons are never not cool," Gage said.

Before things kick off in The Coalition, there are a few more issues of The Ninja Files left to go, and the remainder of the first arc holds a number of exciting moments for Gage. 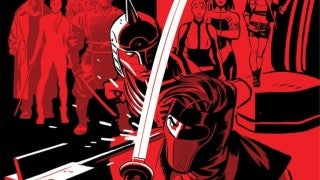 "The introduction of Ninja-G; stunning art by Tomás Giorello, Juan José Ryp, Roberto de la Torre, and Diego Rodriguez; the resolution of the first arc and what Ninjak learns from it; and following that, my first time really writing Ninjak as part of the wider Valiant Universe!," exclaimed Gage.

Speaking of that first arc, Gage has already introduced fans to a number of previous Ninja Programme members. Still, there is one member that has quickly become his favorite.

"Probably my favorite thus far is Ninja-G. She's so badass and awesome," Gage said. "She didn't change a ton from my initial concept, but one big part her life now didn't occur to me until I was writing, and I think it works really nicely. I also love the way Juan José Ryp drew the hell out of the issue!"

Fans can check out the preview for Ninja-K #6 in the gallery and in the images up above, and the description of the issue can be found below. Ninja-K #6 hits comic shops on April 11.

“A once-loyal agent has defected from the ranks of MI-6’s most elite espionage unit…and Ninjak has been dispatched across the globe to prevent his secrets from plunging the world into chaos. But in the shadows of Mexico City, Colin King is about to discover something far more deadly… The Ninja Programme’s own former sensei, the Jonin, has assembled a conspiratorial circle of enigmatic enemies – the Dying One, the Deathless, Linton March, and The United’s Ultimo – for a purpose so sinister that even Ninjak can’t risk engaging them alone. Enter Livewire, Punk Mambo, Dr. Mirage, and GIN-GR – Ninjak's brand-new black ops team with a very specific set of skills…and a license to kill the unkillable!”

“Acclaimed writer Christos Gage (Netflix’s Daredevil) and high-octane artist Juan José Ryp (BRITANNIA) take the driver’s seat for a heart-stopping race to save the world as “THE COALITION” prepares for the ultimate clash of super-teams!”

TSR, the Original Maker of Dungeons & Dragons, Has Re-Launched as New Company