In the series, Turok pursues his kidnapped brother… in the Badlands of the Old West! In the waning days of the Indian Wars, the U.S. cavalry has captured Andar, but Turok will stop at nothing to rescue him. But that quest will lead Turok, Andar, and even the soldiers to a strange, lost land inhabited by creatures beyond their imaginations.

Marz joined ComicBook.com to discuss the series, which will debut in January from Dynamite. Contact your local comic book retailer to reserve a copy.

So you have never done a Turok book before this as far as I know. Is this your first time writing the character full stop?

I’m pretty sure I wrote a brief Turok appearance into one of my X-O Manowar issues, but this is my first stab at him as a lead. So bring on the dinosaurs!

I hear tell that you know a little something about that Bart Sears fellow. Any chance you have tapped into some of his old work for inspiration as you get started on this? 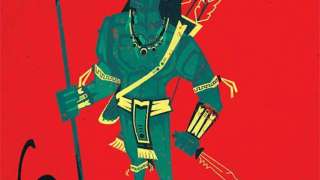 I absolutely looked back at some of Bart’s Turok issues. I actually stumbled upon a copy of the chromium-covered Turok #1 at a discount store not long ago, so I had to pick it up. I think when you say “Turok,” most people think of think if Bart’s art, so it’s only fitting we have him on cover duties. That said, Roberto Castro is doing some stellar work on the interiors.

Did you know that you were going to be working with Castro before you sent the script in or was that just a happy discovery later?

I always want to know what I’m what artist I’m working with before I write a script, so I can tailor it to that artist. That was no different. We looked at a number of artists before we settled on Roberto. He did a set a sample pages that really knocked our socks off, and then honestly his first batch if pages were even better than the samples. I suggested looking at some of the Moebius Blueberry stuff for inspiration, and he’s really taken in that influence and produced gorgeous work.

Have you done anything as the series progressed to really play to his strengths?

I hope I’ve been playing to his strengths right from the start. That’s a big part of the writer’s job. So I’ve written some pages where Roberto can really show off, both landscapes and … well, dinosaurs!

What differentiates this from previous takes on Turok?

Our initial setting is quite different. We are starting this in the Old West, during the Indian Wars, so it’s a fresh version of Turok, but very much the same character in spirit. We wanted readers to be able to plug right into the story, without needing any background from previous takes.

Are there any characters -- either your own, or characters from the Valiant age or whatever -- you would like to see Turok cross paths with?

Hmm, that would be telling. We’ve got some pretty interesting character appearances planned for future issues, but revealing them would spoil way too much of the story. But suffice to say they’re characters I’ve never written before.

The Rock Accepts Daniel Bryan's Challenge for a WWE Match