The crew of Lost City Explorers was looking for answers when they hacked into Sagan Labs' files, but they were not expecting the ones they found.

In our exclusive preview of AfterShock's Lost City Explorers #2, the crew splits up into two groups. The first group engages with Sagan's administration over a possible payout for Homer after his dad's disappearance. The second group works on getting into Sagan's computer system, and somehow they manage to pull it off.

Thing is even this group of resourceful individuals isn't ready for what they find, and it will lead them right into the heart of Atlantis, where Homer's dad might be waiting.

Why are people in the building holding weapons, and what the heck is on that video that they found? We've got plenty of questions, and you check out the exclusive preview in the gallery.

The series is written by Zack Kaplan, who definitely looked to The Goonies as inspiration.

"I've always been fascinated by urban exploration and what underground secrets a city holds," Kaplan told THR. "I grew up on The Goonies, so I remember wanting to go looking for lost treasure or mythical wonders in my backyard. And what's more mythical than the Lost City of Atlantis? This is my millennial spin on all that, something personal, empowering, dark, challenging: a gritty, modern adventure story." 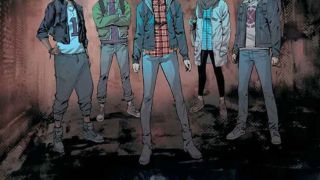 "When teenagers Hel and Homer Coates learn the underground world below Manhattan may hide the mythical Lost City of Atlantis, and their father may be trapped there, the danger has only just begun! The two teens enlist their friends on a mission to recover the rest of their dad's research and rescue him before his shadowy employer finishes covering up the failed expedition.

Explore science fiction and archeology in this new adventure series by Zack Kaplan (Eclipse, Port of Earth) and Alvaro Sarraseca (Magnus, Turok) that HAD to be told at AfterShock!"

The Last Kingdom Movie In The Works At Netflix