DC has provided ComicBook.com with an exclusive preview of Green Lanterns #55, which is due in stores on Wednesday.

With only three issues to go before Green Lanterns wraps up to pave the way for Grant Morrison and Liam Sharp's much-anticipated Green Lantern reboot, writer Dan Jurgens and artist Mike Perkins are pitting the Cyborg Superman against a Green Lantern Corps debilitated by the fact that he has managed to compromise their rings.

"I do. Part of my concept here was to say that these rings are all connected by a single power source," Jurgens told ComicBook.com. "If you start to think of it like computers on the internet and the connectivity that is there, to me once you start to mess with one ring, you kind of start to mess with all fo them. I do see this level fo connection among the Green Lanterns."

In issue #55, the solicitations say that "the Ravagers and Eon battle the Green Lantern Corps on Mogo for the fate of the universe! (In other words, it’s Tuesday.) Hal Jordan has had enough of this Man of Steel knockoff, so he’s seeking out the former Cyborg Superman with the sole intention of handing him his butt! However, Henshaw’s ability to hack the Corps’ power rings may give him all the leverage he needs to take over the universe."

"I think the undercurrent that goes through all of this is trust and distrust, but it’s all wrapped into this big adventure that I think spans a lot of different things and certainly is hopefully a lot of fun at the same time," Jurgens said. "I think the reveal of who’s behind all of this in terms of it being Hank Henshaw, and the grand adventure of it all, makes it fun." 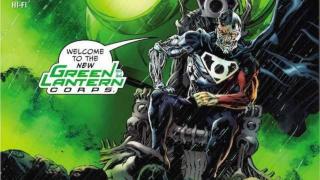 The last fans saw Henshaw, Jurgens gave him what could have been a proper send-off in Action Comics #999, with Superman providing him with an approximation of happiness in the Fortress of Solitude, rather than trying to punish his old foe. This story does not directly address how or why he left (although Rogol Zaar's attack on the Fortress in The Man of Steel seems like a likely explanation), but Jurgens admits that however tidy that ending was, it was never going to be permanent.0comments

"When I did [Action Comics] #999 I had a couple of different ideas floating around in my head as to what would come next or Henshaw," Jurgens said. "At the point we left him he either get out and becomes a villain again or he gets rehabilitated. I don’t think you necessarily want to rehab the character at this point. I thought, what’s the next story?"

Green Lanterns #55 will be available in comic shops and online on Wednesday, September 19.