The release of DC's Batman Ninja animated film is still a few months away, but Prime 1 Studios just debuted a breathtaking new companion piece for it.

The company recently shared their Batman Ninja statue, which you can check out several photos in our gallery below. The statue features DC's Caped Crusader, with a katana in hand, perched on top of a Joker-themed base. 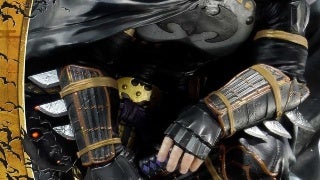 The statue is currently available for pre-order, and will set you back $999. A "Deluxe" edition of the statue is also available, which will include a painted background and various other features, and will retail for $1,299. If that's a little to rich for your blood, you could always go with the S.H. Figuarts figures.

Here's the official synopsis for the film:

"Batman Ninja takes a journey across the ages as Gorilla Grodd's time displacement machine transports many of Batman's worst enemies to feudal Japan - along with the Dark Knight and a few of his allies. The villains take over the forms of the feudal lords that rule the divided land, with the Joker taking the lead among the warring factions. As his traditional high-tech weaponry is exhausted almost immediately, Batman must rely on his intellect and his allies - including Catwoman and the extended Bat-family - to restore order to the land, and return to present-day Gotham City."

Batman Ninja will be released on digital on April 24th and on Blu-ray on May 8th. Prime 1's Ninja Batman statue ship out between April and June of 2019.

Titans Star Addresses Being Let Go From The Series

Sasha Calle's Supergirl Rumored to Be Getting HBO Max Series