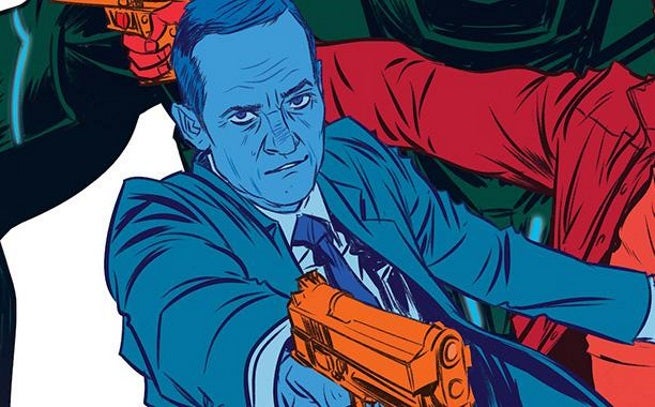 Marvel Studios and ABC have released the next installment of the Agents of S.H.I.E.L.D. Season 2 "Art of Evolution" poster series.

Executive producer Jeff Bell tells EW that "Frenemy of my Enemy" will set the final act of Agents of S.H.I.E.L.D.'s second season.

"I think the way this ends…18 really sets up nicely the final four, which I think kind of move like a train," Bell says. "If you had gone to see a 22 hour movie, this sort of launches us into act three, where everything starts coming together. So we've got S.H.I.E.L.D. 2.0, and we've got Hydra, and we've got Inhumans, and we've got Ward, and we've got all those different threads. And we're starting to put those together in new combinations in new ways, and that will propel us into the last four episodes."

In "The Frenemy of my Enemy," a dangerous new alliance is formed as Coulson and Hunter turn to the last person anyone would expect – Grant Ward! As the war between S.H.I.E.L.D. factions continues, Skye and Lincoln will find themselves drawn into this conflict.

Marvel's Agents of S.H.I.E.L.D., "The Frenemy of my Enemy," airs Tuesday, April 21 at 9 p.m. ET on ABC. Check out the full teaser poster in the gallery below.

Agents Of S.H.I.E.L.D.: The Frenemy Of My Enemy Teaser Poster Released