Major spoilers for Guardians of the Galaxy Vol. 2 follow.

The Marvel Cinematic Universe doesn't exactly have a credible reputation when it comes to killing characters. The franchise has faked out and undone some of the most impactful deaths it provided to characters and fans in its now almost 10 years of existence.

With Guardians of the Galaxy Vol. 2's touching character death, this won't be the case. Yondu is dead and will stay that way is the ruling from writer/director James Gunn.

Gunn, who also helmed 2014's original Guardians of the Galaxy movie, took to Facebook for a spoiler-filled Q&A with fans over the weekend, where he made an official ruling on Yondu's future in the Marvel Cinematic Universe as a living character. While we may or may not see him again in some form of storytelling, it won't be alive and well in the current setting.

"Yondu is dead," Gunn said. "I think it's very important that in these movies, there are stakes within the films. I am not into this old school way of doing things, where you kill characters and you bring them back and then you kill them again and then you bring them back and their deaths mean nothing. Yondu is dead. It's sad. There could be a prequel Yondu film or a flashback or something like that. Yondu could exist in the past, but he's not going to come back to life, so long as I am involved with Marvel. It's just not going to happen."

Yondu's death was not an easy decision for Gunn. In fact, the director almost elected to sit out the third and final chapter of the Guardians trilogy as the idea of leaving his good friend Michael Rooker out of the film nearly steered him away from it entirely. 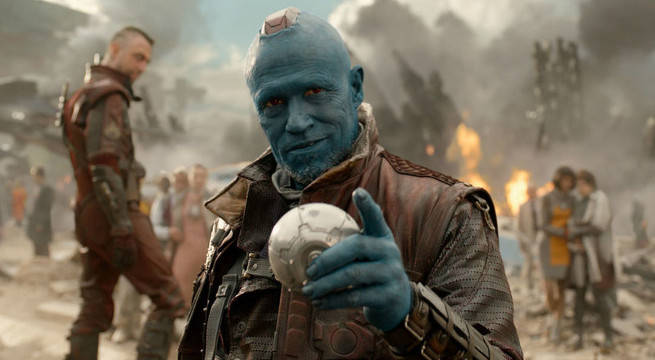 Set to the backdrop of ‘Awesome Mixtape #2,’ Marvel’s Guardians of the Galaxy Vol. 2 continues the team’s adventures as they traverse the outer reaches of the cosmos. The Guardians must fight to keep their newfound family together as they unravel the mysteries of Peter Quill’s true parentage. Old foes become new allies and fan-favorite characters from the classic comics will come to our heroes’ aid as the Marvel cinematic universe continues to expand.

WandaVision: "You're Wanda" Trends as Fans Choose Which Sitcoms They Want to Live in

Does WandaVision Really Need a Villain?