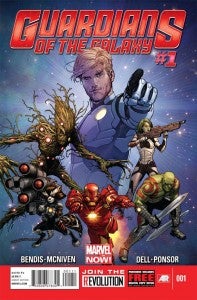 Earlier today at New York Comic Con, Marvel Comics confirmed the long-standing rumors that Brian Michael Bendis and Steve McNiven would take on Guardians of the Galaxy for Marvel NOW!. A Point One issue will launch in February, followed by the series's official #1 in March. One minor tweak nobody was expecting? Iron Man will now be a part of the team, joining Star-Lord, Drax, Groot, Gamora and Rocket Raccoon in protecting the Marvel Universe from threats too big for the Avengers. Iron Man is, of course, a member of Jonathan Hickman's New Avengers team, a book that sees the Illuminati recast as Avengers and which appears to have at least a somewhat cosmic scope--so perhaps there will be some degree of cooperation between the two titles. Then again, it could be a ruse. Marvel's Steve Wacker, present at the Cup o' Joe panel where the title was announced, joked that the character on the cover as someone in "Iron Man-looking armor," but "I know Bendis and Iron Man writer Kieron Gillen have been talking a lot." There will also be a man in Star Lord-looking armor--and it'll be Star-Lord. "I'm actually like redesigning the Guardians, so it won't be the same helmet," series artist Steve McNiven told the audience. "He'll have a helmet, but he won't have it on all the time." The Guardians of the Galaxy, who are currently appearing in Avengers Assemble by Bendis and his longtime collaborator Mark Bagley, will soon go in front of the cameras with director James Gunn, as Marvel's first team movie following the success of The Avengers this summer.