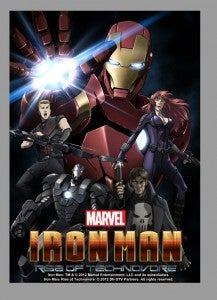 Earlier today, Marvel Studios announced Iron Man: Rise of the Technovore, an animated feature film produced in cooperation with Sony Pictures Entertainment Japan. Marvel's Head of Television, Jeph Loeb to reveal more information surrounding the film at New York Comic Con during the Marvel TV Presents Panel on Saturday, October 13 at 4:15pm in Room 1E13. The film will come to video in Spring 2013, putting it in line with the release of Iron Man 3, and will feature a number of other Marvel heroes and villains, from the ones Iron Man routinely hangs with in The Avengers to others Disney doesn't currently have access to, like The Punisher. The film, which is directed by Hiroshi Hamasaki from a story by Brandon Auman, "explores a confrontation between Iron Man and the villainous Ezekiel Stane, who develops new bio-technology that seemingly outclasses the Iron Man armor.  After Stane unleashes a terrorist attack and sets Tony up to take the fall, Iron Man must evade S.H.I.E.L.D.'s man hunt and find a way to clear his name." The film will be animated in a visual style that's reminiscent of traditional Japanese animation, something that is not entirely unfamiliar to Marvel fans, who have seen similar styles before--but this time around, there are characters who haven't been included in previous "Marvel Anime" movies. "Marvel is excited to present an all-new Iron Man adventure featuring the high-tech adrenaline he is known for, in the beautifully rendered anime style of our friends at Madhouse," said Producer Megan Thomas Bradner. "We'll get to see familiar Marvel Super Heroes such as War Machine, Nick Fury, Black Widow, Hawkeye and The Punisher, rendered in anime style for the first time. It's a can't miss for any Marvel fan."