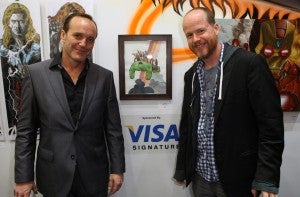 In a new interview with Fastco.Create, filmmaker Joss Whedon discussed the need to "creatively recharge" from Marvel's The Avengers, a grueling and exhasting film shoot, by making Much Ado About Nothing, an ultra-low-budget Shakespeare film shot at his home with actors he already knew. Along the way, though, he was put on the spot to explain why, in spite of that exhaustion, he was willing to take on not only a sequel, but an aggressive development slate at Marvel that would seem to preclude much flexibility to make more films like Much Ado. "There's a business aspect to it and I would be disingenuous not to say that, but the question for me is, Do I have another story to tell about these people?" Whedon explained in the interview. "So we worked on the business side of it and I didn't think it was going to happen--I was like 'I'm never going to do this again.' But once they worked on the business aspect of it I thought that seems fair and cool, so, the question was, Do I have another thing to say? I was in London and I went to a pub and had some fish and chips and a pint and started writing in my notebook. I'm writing if I was going to do this what would I say and 40 minutes later I filled the notebook. So I text my agent and said to make the deal. I'm so in love with that universe and the characters and they way they were played and I have so much more I want to do with them. I know I can't match the success of the first one but I can try to make a better film and that's what I'm excited about, that's the new room of fear I'm entering now."