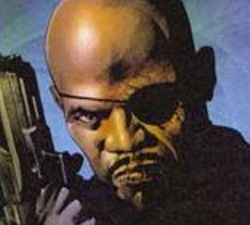 With the highly likely prospect that Samuel L. Jackson will not be returning to the much-ballyhooed role of Nick Fury in various Marvel movies, it's now time to cast that wide net of speculation as to who could replace him in future representations. With the Ultimate Marvel version of Nick Fury having a basis in Samuel L. Jackson's appearance and swagger, a recasting process will be interesting, as it could be a case of the tail wagging the dog. Would Marvel reconfigure Nick Fury for the Ultimate universe, based on what happens with casting, or would they simply continue on? Will Marvel films revert to the Nick Fury of the Marvel 616 Universe? Who can say, but after all, isn't that the fun of speculation?

Speaking of speculation, let's move on to possible and plausible suggestions for replacements for the great bald one.

- If this is an obvious choice for many, let's go ahead and get it out of the way. He has several things that work to his advantage with his role consideration: he is a widely known actor, he is African-American, if Marvel keeps the character that race, but most importantly he has a relationship with Marvel and its material based on his participation in the Blade trilogy. Also, consider some of the tougher, more stunt heavy roles he has tackled over the years. Films such as Murder at 1600, Demolition Man, and Passenger 57 have certainly prepared Snipes for a role as a leading espionage and tactics expert. Plus he looks good in an eye patch. Now if only that prison thing weren't in the way.

Few actors have taken on roles in tougher films over the past decade. After gaining wide acclaim in the wrenching film Amistad, Honsou went on to other demanding, physical roles in Gladiator and most recently Blood Diamond. Marvel should pay attention just for his strength in those roles alone. It also doesn't hurt to add another (twice) Academy Award nominated actor to your film franchise. Honsou brings a presence to his roles, and for a character as iconic as Nick Fury, what else can you ask for? Originally from Africa, Honsou could add an international aspect to his role that would be an intriguing twist. Already the voice of the Black Panther in an upcoming animated series, Marvel and its associates obviously see something in this model turned actor.

Perhaps this name is a dark horse candidate, but when you consider the types of roles he's chosen and the willingness to mold himself, physically and mentally, into a character, Mickey Rourke has to be at least in the conversation as the replacement for good ole' Sam. With earlier roles in movies like The Outsiders and Rumble Fish, Rourke established himself as someone that could communicate presence and strength amongst other screen heavies like Dennis Hopper. With an amazing turn in Sin City and accolades for his comeback kid turn in The Wrestler, Rourke is on everyone's lips again, and not as a joke. He'd be perfect at channeling the 'never say die' spirit and grit that we saw so much, especially in SHIELD's early days, as the head Howling Commando.

I know what you might be thinking. Could this British , most recently known for turns as James Bond, actor be able to pull off the role? Maybe this is a role that Craig would be good for after a bit of physical weathering, but he does have experience as cool, calm and ass-kicking. James Bond is an iconic role, and for Marvel, its iconic war hero needs someone who can lend it some roots in reality. You believe Craig when he acts, and the impossible stunts he pulls off in Casino Royale and Quantum of Solace would make him a great fit for, what we can only imagine would be, crazy and jaw-dropping action sequences in a blockbuster Marvel movie. Could he do it?

Anyone who steps into this role will have big shoes to fill: both Jackson's as an actor and Fury's as a character. Whether Marvel decides to keep the Ultimate version or go with the 616 version is unclear. Maybe Jackson and Marvel can reach a deal, but let's go ahead and expect that that may not happen. The right actor for this role has to be a combination of all the things above. Someone not famous enough won't measure up, someone too 'pretty' wouldn't put on the right appearance, and someone too serious would just weigh it down. Like Nick Fury himself, the actor who gets this role will have a lot of responsibility, a sense of adventure, and a vision to do the right thing by others.

Marvel Hath No Fury: Who Should Replace Samuel L. Jackson?