Eddie Brock is back in the Venom driver's seat, but he isn't the only one with a symbiote to call his own after the events of Venom Inc.

Spoilers incoming for Amazing Spider-Man: Venom Inc. Alpha #1, so if you haven't read the issue yet you've been warned.

While Eddie Brock has an undeniable bond with the symbiote, the suit also bonded substantially to Flash Thompson, who wore the suit after it left Mac Gargan. Flash used the suit for altruistic purposes, something the suit had never really experienced before, and it grew to enjoy that way of life.

After that, though it ended up separated from Thompson and found a new host. Unfortunately, that host was the complete opposite of heroic, and the suit constantly rebelled against him. At that point, Eddie Brock came back into the picture and took the suit back. In Venom Inc. though Thompson has come back to reclaim the symbiote, and the suit is having a hard time deciding between the two. 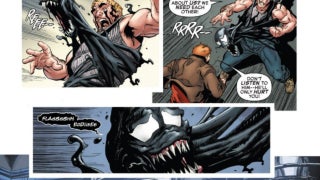 Flash appeals to the suit directly as his partner, and it causes the symbiote to react and attach itself to him. It is also still attached to Eddie Brock, as both fight for control. Spider-Man descends onto the scene and spots a vat of a special serum that Brock has been using to help control the suit's impulsive urges. To stop the conflict and tear the symbiote away from both peple, Spider-Man kicks the vat over onto the Flash and Eddie, but it only hits Flash.

When Spider-Man asks if Flash is okay, he replies "Yeah...I'm good, and not Venom. So not Venom. In fact, it looks like I'm...what'd we used to call you, Brock? I'm Anti Venom!"

Flash emerges in a new white symbiote suit, which takes after the serum that he was dosed with. How this will affect Eddie Brock's power levels (if at all) is unknown, but it seems Flash finally has the suit back, and Spider-Man's life just got a bit more complicated.

You can find the spoiler images in the gallery, and Amazing Spider-Man: Venom Inc. Alpha #1 is in stores now.