The Legacy era of Marvel has kicked off in grand fashion, but things are set to get even crazier according to Marvel's latest tease.

Marvel released a new poster revealing Wolverine holding his infinity stone next to Star-Lord and Captain Marvel, who are also holding infinity stones. The text reads "They hold INFINITY!" on the top, with "The countdown begins in February" at the bottom.

You can view the poster in the gallery. 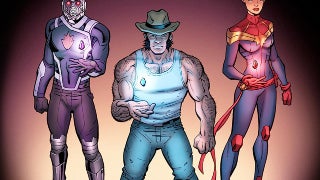 Fans know that Logan discovered his Infinity Stone during the events of Marvel Legacy #1, and Star-Lord recently encountered another one in this week's Guardians of the Galaxy. There is one teased in this week's issue of Captain Marvel, but it isn't seen in Carol's hands, so how that plays out remains to be seen.

Next year is going to be very busy for Marvel, and it looks like the Infinity Stones will play a big part in shaping the next era of the Marvel Universe. There's also plenty of questions remaining, like who has the other stones, and what exactly do the heroes plan to do with them? Someone like Logan isn't exactly one who seeks power, but they could definitely aid them in their daily quest to keep the world spinning.

Loki has also been teased not only with an Infinity Stone but with the entire Infinity Gauntlett, and this could very well be heading in that direction. The heroes are obviously not going to give it up without a fight, and that battle littered with Infinity Stones is going to be rather epic.

While the Infinity Stones are causing havoc, there will also be chaos in the realm of magic thanks to Nick Spencer and Donny Cates' upcoming Doctor Strange event Damnation. As they recently revealed to ComicBook.com, that will take place in its own pocket of the universe but will have an impact on the greater universe as a whole.

"Yeah, when Nick and I began talking about this story, we both gravitated towards those really fun "corner events" like Annihilation," Cates said. "A story that focuses on one specific corner of the Marvel Universe, but still has vast consequences and very high stakes. In that way, Nick and Rod and I have set out to make this a kind of Magic Annihilation. Wait... that's a dope title. Can we use that??"

The Variants #1 Review: A Hardboiled and Beautiful Multiversal Triumph