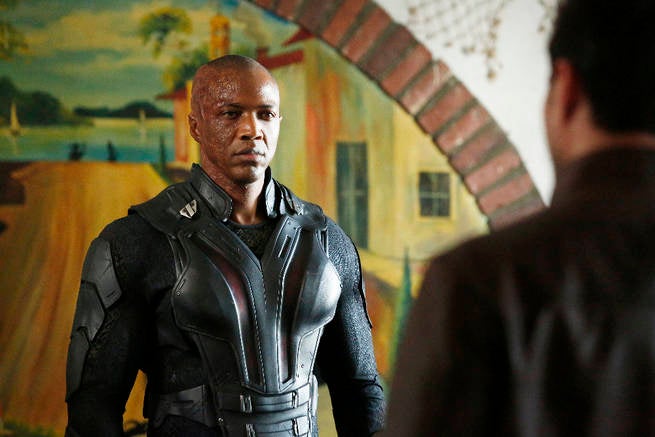 In San Francisco, Fitz walks down a street with two agents following him. Fitz breaks into a run, and then men follow suit. Fitz climbs to the top of a parking garage and the men follow, but can't find Fitz. He's already gotten on board the cloaked Quinjet with Coulson, Hunter, and Deathlok.

Fitz gives Coulson the Toolbox. Coulson fills Fitz in, says they're trying to find the new Hydra heads, Dr. List and Baron Von Strucker. To do so, they're making a deal with Ward.

List examines the cadaver of Ethan, who died during experimentation. He's disappointed that they didn't find a quantum signature.

At Afterlife, Cal tells Jiaying that last night's dinner was almost exactly as he imagined it, except that Skye is still afraid of him. He wishes Skye could have known him before his mind was so broken. He also knows that his being at Afterlife puts Jiaying in an awkward position, and he agrees to lay low until their next family dinner. Jiaying says she'll have Gordon take him to get some of his things.

Skye and Lincoln are playing a game, but Skye is thinking of dinner. She's surprised at how nice it was. Skye tells Lincoln that Jiaying is sending Cal away. Lincoln says he doesn't belong here, but Skye says it's a bad idea. Lincoln tells her to talk to her mother about it.

Bobbi and Mack are sparring. Bobbi asks how Simmons is doing with the Toolbox, and Mack says he thinks she's stalling. Bobbi says she's bothered that they're focusing on Coulson and the Toolbox instead of Hydra.

Simmons tells May that they're bringing in a laser to cut through the Toolbox. She closes the door and confesses that she swapped out the real Toolbox for a fake. May says she'll handle it.

Agent 33 is on the phone with her mother and gets off in a hurry, just in time to be surrounded by Coulson and Deathlok. Coulson calls Ward on Agent 33's phone and tells him to come by.

Deathlok asks Agent 33 if she has another mask like the one on her face, but she says no. Ward shows up. Deathlok scans him and tells him to disarm himself. Ward drops several weapons on the table and then walks over to Coulson.

Coulson tells Ward that he wants Strucker and List. Ward says he never met them, but Coulson assumes he can find them somehow. Ward reminds him that he suggested they work together before and Coulson turned him down. Coulson offers to put Ward through the T.A.H.I.T.I. program in exchange for his help. Ward sees it as a threat, but Coulson says it's the only way he gets out of here alive, and that it will leave him free and clear.

Simmons is faking research on the Toolbox. May walks in with Bobbi and tells a story that Fitz swapped the boxes without Simmons knowing. May wants Simmons to tap into Deathlok's computer to locate Coulson and Fitz.

On the Quinjet, Fitz voices his displeasure at having to make a deal with Ward to Hunter.

At Afterlife, Jiaying and Gordon discuss Raina's precognitive gifts. They've found none similar in their records. Skye comes in and Gordon leaves. Skye talks to Jiaying about Cal, and how she worries that he'll hurt someone when they abandon him outside of Afterlife. Jiaying says those people aren't her concern, and that she has to do what's best for Afterlife and the Inhumans.

Deathlok meets Coulson, tells him that he got the package. Agent 33 and Ward are in the back of the car. Ward knows something is wrong, since May isn't there. Agent 33 worries about them wiping his memory, but he tells her not to worry. They kiss until Deathlok comes and gets them. They open the trunk, and Bakshi is inside. He agrees to comply with whatever Coulson wants.

Skye goes to see Cal. Cal offers to bring her something back from his trip to the mainland. Skye asks if he's going to China. Cal says no and gets upset. Skye says she thought he was going home. He explains he was only in China with Doctors without Borders, and he stayed for Jiaying. He says he's from Milwaukee, and she offers to go with him on his trip back.

Skye makes her case to Jiaying. Jiaying isn't impressed. Skye tries to explain how hard it was to have lost a family. She says she just wants to soften the blow of Cal having to leave.

At the base, Simmons and May argue about May blaming Fitz for swapping the boxes. Simmons accuses May of being on Bobbi's side, and May says she's just looking for the truth.

Gordon drops off Cal and Skye and then leaves. Cal says he actually just works there, but he wanted to show Skye around. Cal heads towards a bakery, but finds a currency exchange in its place. Cal tells Skye about Jiaying when they first met, and their plans for raising Skye.

Bakshi and Deathlok meet List on a plane, as the rest of Coulson's team watch through Deathlok's eyes. List tells Bakshi about how much more complicated things have become, and wants to know how Bakshi escaped the fate that befell all of Hydra's other heads, but Bakshi talks his way around it. Bakshi offers Deathlok to List, and suddenly everyone on the Quinjet pulls guns and knives on each other. Deathlok gets ready to attack. Everyone agrees to put their weapons down in time to tell Deathlok to play along. List's assistant alerts him to another incident, and the plane takes off. The Quinjet follows.

Cal laments the changing of the times as he and Skye walk through the city. Some men bump into Skye, and Cal nearly loses his cool. Skye diffuses the situation and sends Cal inside a building to find ice cream. She calls May and alerts her to the fact that Cal is likely about to go off. May sends Mack and Bobbi with a team to go get them. Cal wants to head over to his old office to show Skye something special. Lincoln is watching them.

Gordon tells Jiaying he hasn't heard anything from Lincoln yet. Gordon tells her that when he went to pick up Ethan, he couldn't find him. Jiaying is concerned with who would have taken Ethan.

List says Strucker is in Eastern Europe, but they're making a stop first. List tries to explain quantum entanglement, and Fitz realizes they're tracking Gordon to get to Skye.

Cal and Skye get to Cal's old office. She sees his nameplate with the last name "Johnson," and realizes her name would have been Daisy Johnson. Inside, Skye sees the hula dancer on Cal's desk. She had one as well. Cal tells her he owns the building. He unlocks a filing cabinet and pulls out his grandfather's field kit. He says he used it to put Jiaying back together again. Skye realizes that Cal still loves Jiaying. Skye finally breaks down and tells Cal that they all need to move on. Skye says she can visit Cal, and Cal is confused. They hear a sound, and Cal pulls shears from the kit and investigates. They find Lincoln in the hallway, and Cal gets angry that Jiaying wouldn't trust him with Skye. Cal figures out what's going on and become angrier and attacks Lincoln. Meanwhile, Bakshi and Deathlok hunt for Gordon.

A Hydra team enters the building as the Quinjet lands on the roof. Cal attacks the Hydra soldiers. Skye runs. Deathlok spots her. Coulson tells Ward to keep Hydra busy, and Coulson moves to grab Skye. Lincoln runs into Deathlok and electrocutes him, but he doesn't' fall. They fight, but Deathlok's feed to Fitz goes dead and he realizes someone is hacking the feed. They split up, and Ward follow Coulson, leaving Hunter and Agent 33 behind. Hunter takes a bullet in the arm.

Coulson and Ward see Lincoln get tossed out a door, and then find Deathlok. Simmons hacks into Deathlok's feed just in time to see Coulson and Ward standing side-by-side. Bakshi shows up after Coulsona and Ward move on. He tells the Hydra soldiers to take them both and they use some kind of special grenade to disable Deathlok and Lincoln.

Skye sees Coulson and Ward fighting shoulder-to-shoulder. She moves towards them, but Gordon shows up and grabs her, teleporting away with Cal. A Hydra soldier shows up behind Coulson, but Ward takes the soldier down.

Bobbi and Mack show up and find what's left of the battle. They find Coulson sitting in Cal's office. He agrees to come back to the base.

Marvel's Agents Of S.H.I.E.L.D. Season 2 Episode 18: The Frenemy Of My Enemy Recap With Spoilers