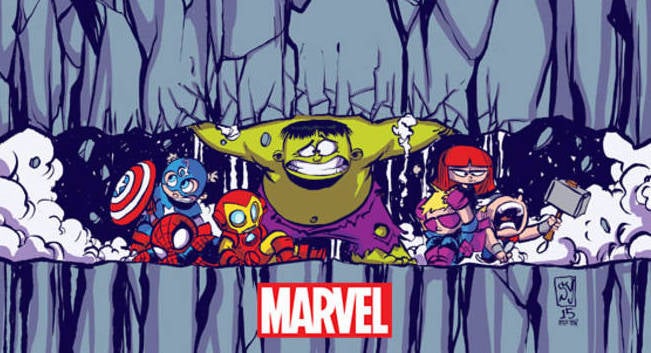 It means that there will be a "616 finale!" and that means exactly what many fans have suspected – everything ends. We've been saying it over and over again but at the core, Battleworld IS the Marvel Universe when Secret Wars #1 hits in May. But before that, there will be a number of titles reaching, what we're calling, a "616 finale," ending those stories and characters as you knew them – for now!

Secret Wars is unlike any event ever published. It's not just an event with a few tie-ins, it's an entirely new publishing line, an entirely new television network's fall line-up if you will. It's not unlike what was done in the 1990s with Age of Apocalypse. Even then, that was just the X-Men titles. But this is so much more. The entire Marvel Universe will be affected in some really shocking, really surprising ways. And that's just the beginning of the fun!

Secret Wars will affect every title in some way shape or form so you can definitely expect Spider-Gwen, Howard the Duck, All-New Hawkeye and others to deal with it in their own ways. Like I mentioned before, none of our creators were blindsided by Secret Wars so they've all had plenty of time to work it to their advantage – catering to their own tastes and storytelling, using the event to add something new to the Marvel Universe that wasn't there before. Of course, existing titles and franchises will also be affected – the Avengers, the X-Men, the Inhumans, the Fantastic Four, Spider-Man and the rest of the Marvel line. But some of those books had a little more time to get up to speed with what we had planned, so allowances needed to be made.

Keep in mind that even though we all knew Secret Wars was on the horizon, we still needed to publish comics until then! Look at what we've been putting out there since October. From the new Thor, All-New Captain America, Superior Iron Man, Ant Man, Squirrel Girl, Silk, Spider-Gwen, Howard the Duck and on up through Uncanny Inhumans, it's pretty clear that we've continued month after month to excite the industry with new ideas, new concepts, new characters! We've had a plan for each and every title in our line, from the All-New Ghost Riders to the Spider-Gwens and Howard the Ducks and even throughout our core titles. Some may take a hiatus for a month or two (something the industry is accustomed to); some will reach their "616 finale;" some become Battleworld transformed; and still others…well we'll get to those!

-BATTLEWORLD titles are almost like our regular monthly titles. The core continuity. These books are what's happening in the Secret Wars Universe and the continuity of Battleworld. How do these territories all co-exist? How do they work? These books will tell you all you need to know about what's happening during the event. In the TV season analogy, these would be the primetime shows.

-WARZONES! are the building blocks of the Marvel Universe, event level stories all on their own. While these are mostly self-contained, they're also grand pieces of continuity from Marvel's past and new spins on existing favorites. All of which are laying foundations for a new Marvel Universe. Each of these stories can be read on their own, but you can bet that each of these titles is going to have a big effect on the future of the Marvel Universe post-Secret Wars. Finally in the TV season analogy the Warzones! titles would be the Oscars, Grammys, Super Bowl, and the Saturday Night Live 40th anniversary special rolled into one!

To us, the term "tie-in" has such a narrow scope in terms of ONLY relating to one central story. That term doesn't really describe these. Secret Wars series are the Marvel Universe series throughout the time it takes us to tell Secret Wars.

Axel Alonso and Tom Brevoort have been working very closely with the individual creative teams to ensure that each and every title is additive to the Marvel Universe. New characters, new locations, new villains and so much more are going to be born in these pages. And you can bet you're going to see those reflected post-Secret Wars.

This is the finale of the 616 universe, and it's going to be BIG. We needed to take the time to announce all of our May and June books before we could begin to talk about what comes after! And even now we have to keep a tight lid on so much excitement that sometimes we're all fighting with each over about how much we want to contain. So many fans want to know the ending of Secret Wars before it's even started. While you'll all have to wait and see, I will say this:

Great! We're going to surpass a half a million units on the first issue which is amazing. And that's just selling straight to our Direct Market core retailers. We've had an extremely successful year in bringing in new fans and retail partners but I'm extremely proud to bring such a big number to local comic shops. Our marketing team deserves a ton of credit, but it's also a testament to the strong titles the editors and creators put together.

All in all, they're just as excited about it as we are. Retailers and fans have been with us since we announced Secret Wars on a cold night back in October. It's been a crazy ride so far, and we've had every indication that they're sticking around for more. We think everyone realizes that the future of the Marvel Universe is beginning here and the entire comics industry is looking to see what we do next! Retailers know that means more fans in their stores and more money in their pockets. We're thrilled they're on board with this entire initiative.