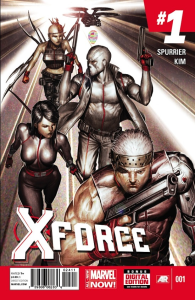 Coming in February, Marvel's two teams of X-Force have been reduced down to one--which will launch with a new #1 from the creative team of Si Spurrier and Rock-He Kim. "X-Force returns to form as the black ops team that isn't afraid to get its hands dirty protecting the species," said Axel Alonso, Editor-in-Chief. "But this time, X-Force isn't looking to keep its existence a secret – they want to send a loud-and-clear message to the world that the Mutant Nation is not to be messed with." According to Marvel, "the Marvel Universe is a different place than it once was – and mutants are in more danger than ever before. Deadly threats are everywhere, and it'll take a squad unlike any other to shut them down before they happen. S.H.I.E.L.D. has it's Secret Avengers, Britain has MI-13 – and now Mutantkind has X-Force! In this game of no-holds barred, superhuman black-ops – it's kill or be killed. And with veteran X-Man Cable at the helm – Psylocke, Fantomex, Marrow, and more are going to ensure that Mutants have a stake in the future of the Marvel Universe – by any means necessary!"