Marvel fans have waited a long time, but it seems the finale to Jonathan Hickman's S.H.I.E.L.D. is actually happening.

In 2010 Marvel fans were introduced to Hickman and artist Dustin Weaver's SHIELD, but the series never crossed the finish line, with two issues remaining. Now ComicBook.com can exclusively announce that this May SHIELD #5 and #6, as well as a brand new one-shot SHIELD: The Resurrection (collecting issues 1-4) will hit comic shops everywhere.

"Well, it's true, this doesn't have anything to do with the Lindbergh baby, but without a doubt the real crime of the century is how long we've been sitting on this amazing Dustin Weaver art," Hickman told ComicBook.com. "Someone should definitely go to jail. Which I'm cool with as long as it isn't me."

"S.H.I.E.L.D.'s long hiatus, like the feeling of unfinished business, has been a nagging presence in the back of my mind," continued Weaver. "Finally having it out in the world will be very gratifying. I'm proud of it and excited to finally share the last issues. Having it out will also be a relief. I think now my spirit can go into the light and I won't have to keep haunting Jonathan Hickman."

You can find the exclusive preview in the gallery, and the official descriptions for all three issues below. 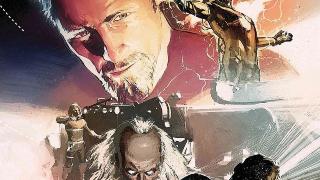 "Delve deeper into the hidden past of S.H.I.E.L.D. — along with some of history's greatest minds! Michelangelo has been pulling the strings for years, and is now becoming the prime mover. Can he keep Leonardo Da Vinci and Isaac Newton from killing each other and destroying the Brotherhood of the Shield? The battle for the Immortal City comes to a climactic conclusion! Leonid makes his choice between two fathers! Michelangelo and Nikola Tesla kick their plan into high gear! Galileo takes on Galactus — long before the Fantastic Four did! The truth behind Nostrodamus stands revealed! And Howard Stark lays the foundation for the espionage organization you know and love! Catch up on Jonathan Hickman and Dustin Weaver's secretive S.H.I.E.L.D. saga — before the eagerly anticipated finale! Collecting S.H.I.E.L.D. (2011) #1-4."

Jonathan Hickman and Dustin Weaver's unfinished epic of 2010-2011 finally gets its conclusion!

The Brotherhood of the Shield is made of the likes of Da Vinci, Stark, Tesla and Richards, but they're in trouble.

Sir Issac Newton stands with his foot on the world's throat and no one can stop him!

The battle that decides our present is waged in the future!"