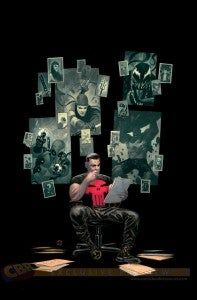 Charles Soule, who's taking over Swamp Thing from Scott Snyder following a critically-acclaimed and fan-favorite run, will now attempt to do the same thing twice, taking over Marvel NOW!'s Thunderbolts--at least for two issues--following the departure of Daniel Way, who launched the series. CBR has the details, saying that Way had to make a difficult decision. "Issue #11 will be -- for the foreseeable future, at least -- my final issue of the series," said Way. "As often happens in this business, another project that I'd been shepherding along for several years finally lined up and, knowing that a second opportunity may never come along, I made the tough decision to step away from Thunderbolts in order to pursue it. It wasn't easy, but it had to be done. Thankfully, Jordan has facilitated the transition incredibly well and I couldn't have been happier when he landed Charles for the fill-ins. This Thunderbolts series and the themes it set out to explore were always meant to play against a global tapestry, and Charles, with his background, experience and blatantly obvious talent, is one of the few writers out there who can not only keep that going but take it to the next level. Frankly, I hope he sticks around." Marvel was mum on whether the two issues they've got planned for Soule--in which he'll explore The Punisher with artist Steve Dillon and then Mercy (with an as-yet-unannounced artist)--will lead to more or whether he's filling in, or what (assuming it's a Marvel title) Way might be taking on in its place. While Marvel NOW! has seen a number of artists shuffled from arc to arc, few of the writers have left their titles yet, and Way may be the first to step away "indefinitely."