Once again, Amazon has introduced a new piece of software which, if it's any good, will have broad ramifications for entertainment. Amazon Studios today announced Amazon Storyteller. Currently in beta, Storyteller is a free online tool that turns scripts into storyboards, complete with characters and dialogue that can then be shared with others for feedback. "We've found that many writers want to see their story up on its feet in visual form but find it harder than it should be to create a storyboard," said Roy Price, Director of Amazon Studios. "Storyteller provides a digital backlot, acting troupe, prop department and assistant editor—everything you need to bring your story to life. We want to see great stories turned into movies and television shows and we'll continue to develop new features and tools that help people develop great stories." 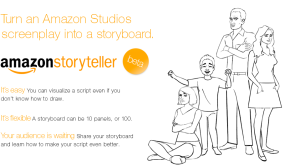 Storyteller begins by scanning a movie script that has been uploaded to Amazon Studios. It identifies the scenes, locations and characters from scene descriptions, and "casts" them from a library of thousands of characters, props and backgrounds. Filmmakers can recast or change locations, or they can upload their own images. Storyteller places the cast in front of the right background so that filmmakers can focus their time on the emotion and energy of scenes by using pan and zoom, changing the facial expressions and positions of characters, adding vehicles or props or adding captions with descriptions or additional dialogue. Once completed, the storyboard can be published on Amazon Studios where other users are able to view it and give feedback on the project. Amazon Storyteller is free, and more information is available at the Amazon Storyteller website, where you can try an interactive demo. The implications for comic books seem pretty clear, here; writers can now create a thumbnail version of scenes (particularly those with complex blocking) to show an artist what they're seeing in their head. This could be particularly useful in a situation where a fill-in artist is on board, so the writer wants more control over the look and feel of the book than the would expect with an artist they know and trust. Artists probably need not worry anytime soon, though; generating these images is much difference than creating the kind of specialized images that would allow the whole comics process to be automated  (although there's a publisher somewhere twirling a mustache at the thought). That said, don't be surprised if you start to see these characters popping up in webcomics as writers with no art skills and no funding to hire an artist get wise to the fact that "slice-of-life" stories that don't use trademarked characters could probably use this tool pretty effectively.

Amazon Rolls Out Script Software That Does Your Storyboards