At the Marvel Studios Panel, one of the big announcements was that the Ant-Man movie would be moving forward. While there was no casting news revealed or official release date announced for Ant-Man, there was some test footage shown and other information revealed. Here are five things we know about the Ant-Man movie so far. Edgar Wright Is The Director – Wright has been attached to the Ant-Man movie as the director for what seems like forever, but Marvel Studios seems content to wait on him. In regards to his slow progress on the film, Wright even teased, "I'm taking the Terrence Malick approach to super heroes." Edgar Wright And Joe Cornish Wrote The Script – During the 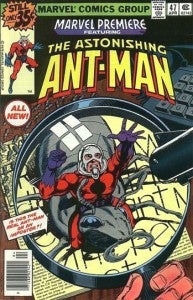 Marvel Studios Panel, Wright talked about writing the script with his co-writer Joe Cornish, who wrote Attack The Block. Despite both having very busy schedules, Wright revealed they had written two more drafts of the script in the last year. Ant-Man Could Adapt Storylines From The Comics – Wright revealed himself to be a big fan of the comic books. While Wright didn't comment directly on if the Ant-Man script would be based on any famous stories from the comics, he showed his knowledge of the comics by referring to two issues in specific. As a kid, Wright said he read a reprint of "The Man In The Ant-Hill" in Tales To Astonish by Stan Lee & Jack Kirby. Wright also held up a copy of Marvel Premiere #47, which featured the "To Steal An Ant-Man" story by David Michelinie with art by John Byrne and Bob Layton. New Ant-Man Costume For The Movie – The Ant-Man costume is a black suit with red highlights, and the mask covers the face completely. The costume has been described as looking a little like the suit in Robert Kirkman's Irredeemable Ant-Man. Wright said, "We wanted 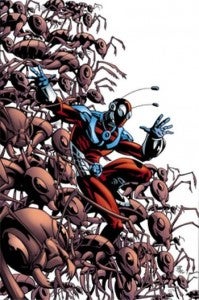 to do a costume that looked a little more practical in a way. And it's something like, we're not giving too much away about the script, but it manages to mix the silver age and like contemporary Ant-Man as well." Ant-Man Will Be Action-Packed – For those wondering what sort of take Wright would have on Ant-Man, he described the film as action-packed. The test clip seemed to live up to Wright's description. In the clip, Ant-Man darts past two guys guarding a door, where he's tiny. He darts to the end of the hallway, grows to full size, charges the guards, then darts down to pint-sized again. He darts, grows, darts, shrinks, slides down someone's tie, grows and knocks him over, goes into an elevator and disappears into an Ant-Man title card. Wright even offered up a tagline for the movie, saying "Ant-Man will kick your ass one inch at a time."