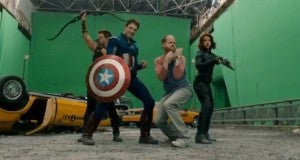 A gag reel from Marvel's The Avengers has appeared on YouTube, featuring about four minutes of outtakes, goofs and a little self-evidently unusable footage from Earth's Mightiest Heroes. The first version of the video is down already, but you can check out the embed below, courtesy Bleeding Cool. Among other things, Iron Man making a Smokey and the Bandit reference, Maria Hill screaming and gesticulating at the camera in a way that no human person ever, ever should again and Loki doing a near-perfect impression of Die Hard villain Alan Rickman. Also, Captain America's years in the service apparently didn't teach him how to handle a prop parachute (which is alright, because Iron Man has just as much trouble with his helmet, and Hawkeye with his bow). The Avengers arrives on DVD and Blu-ray September 25, and one has to wonder whether this particular reel was intended to be released through some news outlet in the morning, not unlike some of the recent footage that's been circulating from the home video release.