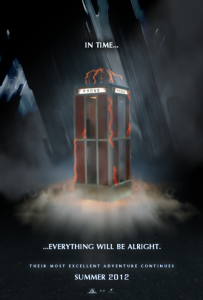 It's been about six months since Alex Winter tweeted that the script for Bill & Ted 3 had been completed. Winter, who played Bill S. Preston, Esquire, in Bill & Ted's Excellent Adventure and Bill & Ted's Bogus Journey nearly twenty years ago, hasn't acted much since then, opting for a career behind the camera and behind the scenes, but he has joined co-star Keanu Reeves in saying that if the script was good, and if original writers Chris Matheson and Ed Solomon were involved, he would be interested in revisiting the character that made him (briefly) a household name. Reeves, of course, is by far the more famous of the pair now, having starred in dozens of high-grossing movies ranging from Shakespeare remakes the The Matrix Reloaded, which nobody could confuse with Shakespeare. He's made some vaguely enthusiastic comments about the possibility of a third Bill & Ted movie but this weekend took it to the next level, confirming that the script is indeed finished and telling The Independent that he's happy with it, Sky News Australia reports. "When we last got together, part of it was that Bill and Ted were supposed to have written the song that saved the world, and it hasn't happened," explained Reeves of the film's plot, which has long been rumored to involve middle-aged Bill and Ted traveling back in time to save the world. Rumors have had characters like Socrates and Billy the Kid returning, while Eddie Van Halen is expected to make an appearance. Van Halen was referenced in the original film but did not appear, while the music community was pretty well-represented by Jane Wiedlin of the Go-Gos (who played Joan of Arc) and Clarence Clemons, saxophonist for Bruce Springsteen's E Street Band, who played one of the "three most important people in the world," who were initially responsible for sending Rufus back in time and kickstarting the film's plot. The second film featured appearnces by "Big" Jim Martin of Faith No More, guitarist Brad Delson (who would go on to join Linkin Park) and the entire band Primus. 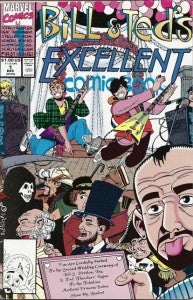 After the sensational success of the first film and the more modest (but still undeniable) success fo the second, the Bill & Ted franchise expanded to a pair of television shows--an animated version which featured the voice talents of original series stars Winter, Reeves and comedian George Carlin (which actually began before the second film hit theaters) and a live-action version which starred none of them. Both were titled Bill and Ted's Excellent Adventures. A comic book series (Bill and Ted's Excellent Comic Book) published by Marvel was released as well, drawn by Milk & Cheese creator Evan Dorkin. That series is available in digest-size paperback editions recently reprinted by Slave Labor Graphics. While that series began with a story adapting an early version of the Bill and Ted's Bogus Journey script, the first film was adapted by DC Comics when the movie was preparing to be released on video. Orion, who originally distributed the films, went bankrupt in 1998. For years even before that, the property seemed to disappear from the public consciousness but a DVD box set in 2005 and the subsequent revelation that a script was being worked on has driven quite a bit of fan enthusiasm, from the poster pictured above to a Facebook page dedicated to keeping an eagle eye out for media references to the sequel.