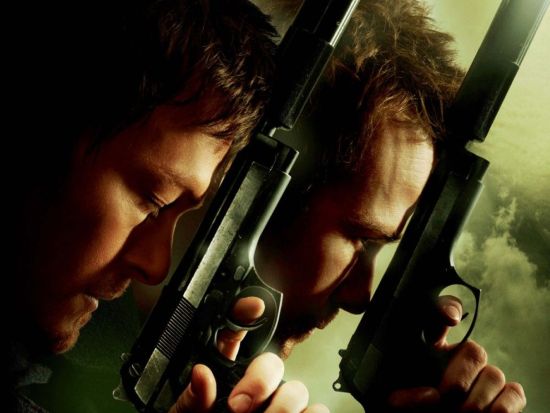 The long-in-development third Boondock Saints movie is apparently moving forward, with a title and some vague plot details just released at Flickering Myth.

The title of the third film is currently The Boondock Saints 3: Legion and the movie will involve legions of people taking the law into their own hands and following in the footsteps of brothers at the center of the first two films.

Administrators of the Boondock Saints Facebook page indicated that a contest will likely be held to offer fans the chance to be part of the Legion.

"It's my fault. It's taken a while [to get the film off the ground]," acknowledged creator Troy Duffy. "It's because I want to get it right."

You can see a number of fan question Q&A videos at the Facebook page (they are not embeddable).

"You know what I did?" Reedus told us at Comic Con last year. "It got cut, but when we were in the car last season, and we're driving--we come out and he hears the phone call? I picked up stuff--I picked up a bunch of rope, wondering if people would pick that up. And it got cut out, but there was a thing which I don't even know if I told anyone."

In The Boondock Saints, there's a memorable scene in which Flanery's character extols the virtues of carrying rope. Wonder if that's one of the things The Legion will emulate...?