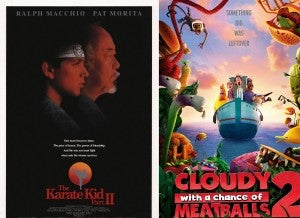 As part of our conversation with Cloudy With a Chance of Meatballs 2 directors Cody Cameron and Chris Kris Pearn, we asked about one of the film's more unique aspects: namely, that it picks up seconds after the conclusion of the first film (which came out in 2009). The animated format allows for this because, of course, the "actors" haven't aged at all, but it's a very uncommon practice; usually a sequel will pick up a few months or years down the line, especially in a comedy or family film where there doesn't tend to be a major, danger-filled cliffhanger that the story leaves off on a la The Hobbit. There were a few reasons that Cameon and Pearn did Cloudy 2 the way they did. One was purely practical; they wanted to have an opportunity to recap the previous film's events for the audience (remember--kids aren't guaranteed to have seen the first one and often times weren't old enough to have seen it in theaters). There's what they say is an elegant device for delivering that information quickly to the audience in a way that's informative without being too exposition-y...but beyond that, they say that the childhood trauma they suffered at the hands of a classic '80s movie sequel informs their decision, as well: "One of our conceits is that it's going to begin with Flint celebrating the victory over the FLDSMDFR with all his families and relatives. It's like they're saying, 'The future's great! We're going to have all these dreams and hopes come true!'" Pearn explained. "And all of a sudden this helicopter drops from the sky and they're scattered. It just gave us a comedy angle to kind of get into the story and kind of pick up where they were last time because we both were very traumatized by Karate Kid, Part II--where it's like, 'Where's the girlfriend?' They kind of do everything off-camera so we wanted to kind of rectify that and make sure our sequel picked up where our first one left off. Cloudy With a Chance of Meatballs 2 is in theaters today. The rest of our interview will run this evening Pacific time.