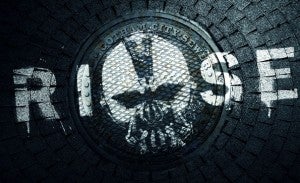 , the new free-to-play browser game that ties into The Dark Knight Rises, hit the Web today and so far it's taking a little time to work itself out. Not only have a number of commenters on Batman fansites been reporting problems with gameplay and crashing, this reporter experienced the same; on Chrome, nobody seems to be able to get it to load correctly. It slows down the browser to a crawl and often crashes. Over on Microsoft Internet Explorer, meanwhile, the game runs like a top, seeming to use far fewer system resources, but the trailer leading into it (arguably the most entertaining part of the game so far) doesn't load for some people. Once you get in, the game is a lot like Farmville or any of those other popular browser- or Facebook-based games where you essentially build territory and relationships in order to get more territory and relationships, in the hopes of--in the case of The Fire Rises--eventually building enough of an army to spread through Gotham and become one of Bane's right-hand men. You're headquartered in the sewer, in an initially-small hideout that can grow as your influence does, by looting and recruiting. Theories that the game would be tied into The Dark Knight Rises viral campaign and that unlocking achievements would unlock footage or some other information seem at first to be unfounded, but of course it's only been a couple of hours, during which the game has been buggy, so it's possible there is still movie-related goodness hiding out there and that fans just haven't unlocked it yet.