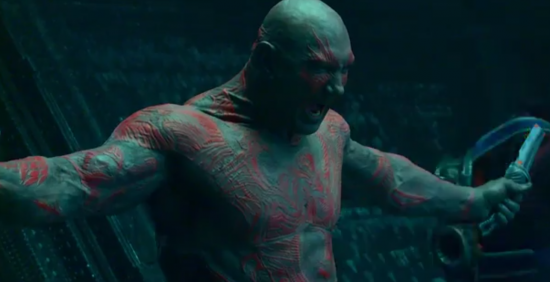 Dave Bautista may have been one of the first people cast in Marvel's Guardians of the Galaxy but we've seen comparably little of the character so far. We know he has an underwater scene, and that he's basically the same badass you would expect from a character played by the WWE wrestler-turned-MMA fighter, but beyond that, not much. And while much was made of the fact that Groot and Rocket didn't speak during the recently-released trailer, neither did Drax or Gamora, as far as we can remember, leaving it up to Star-Lord to be a one-man show. Well, Bautista gets his say now, in the latest of the behind-the-scenes, introductory videos that Marvel is releasing today. Check it out below. "I basically am Drax," Bautista said, adding, "He's basically living solely for revenge but he's a very emotional character. He's dealing with a lot of pain. He added, "I love Drax. I kind of feel like Drax is now mine."

Guardians of the Galaxy Featurette: Meet Drax the Destroyer