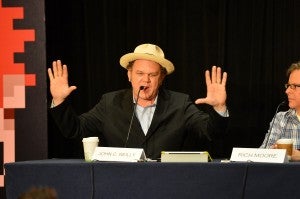 Deadline has confirmed rumors that Wreck-It Ralph star John C. Reilly has been cast as Ronan the Accuser in Guardians of the Galaxy. Of course, they did so in error and in the process embarrassed themselves and everyone silly enough to take them at their word (yeah, that's us, too). Instead, they're now reporting that Reilly is to play Rhomann Dey, leader of the Nova Corps, which would put him in close professional proximity with Glenn Close's character (also if you believe rumors as to what she's playing). Nobody had denied that Reilly was cast but, like most other actors involved with the film so far, his actual character name had been kept under wraps. Ronan was one of the names bandied about from the get-go, however, and as it is wont to do, the press jumped at the opportunity to confirm what we thought we already knew. Seriously, folks, this is how you get ants.