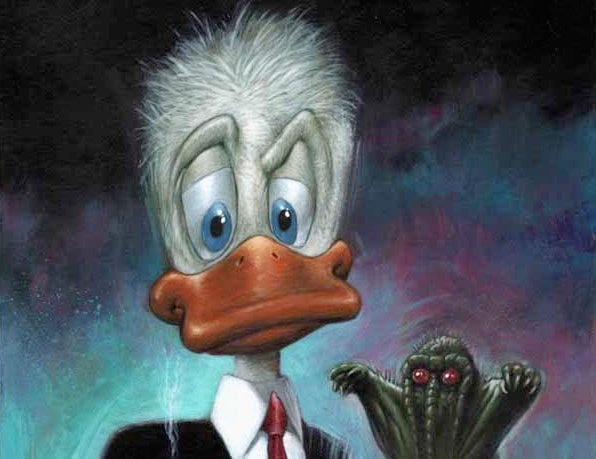 During an interview with ESN.FM's Giant Size podcast, veteran comic creator Val Mayerik said that he would return to one of his most famous creations -- Howard the Duck -- if asked, and that he was taken aback by his and co-creator Steve Gerber's onscreen credit at the end of Guardians of the Galaxy.

"I saw that entire frame, that entire card that was given over to Steve and myself," Mayerik is quoted as saying of the post-credits sequence in last week's runaway hit. "Whereas the other creators, Jim Starlin, Bill Mantlo and so forth, were given credit, but it was more a group of names. I was quite taken aback, I was quite bewildered, I was quite humbled, I was quite…overwhelmed by it. Whoever chose to do that was obviously a big fan of the character, and doing that for me and Steve [Gerber], I thought, was terrific. All I can do is feel a little regret that Steve is not alive to have seen that. Steve would have gotten a real charge out of seeing that, finally, he's gotten his due."

If IMDb (generally credible when it comes to already-released) is to be believed, the original Howard the Duck film gave a screen credit to Gerber, but not to Mayerik.

...Of course, it was such a flop they may not have wanted one.

Asked about the prospect of a return to the character,Mayerik replied, "Yeah, sure I would. Sure I would. I definitely would. In the mid-90's when I started doing storyboards, I never thought I'd say that, but yeah, it really does interest me now. It really does make me wanna do comics again."