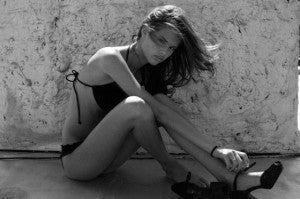 Zoe Aggeliki, the model-turned-actress who will appear in the forthcoming adaptation of Dark Horse Comics' R.I.P.D. with Ryan Reynolds, is poised to be cast in the Hunger Games sequel, Catching Fire, according to various media reports. Rumors have long had Aggeliki in a dead heat with Jena Malone, the star of films like Into the Wild and Hatfields & McCoys, but Hollywood Dame is among the many sites calling the race to play Johanna Mason in favor of Aggeliki. Aggeliki is reportedly favored in spite of her relative neophyte status after both actresses auditioned with director Francis Lawrence, who just cast Philip Seymour Hoffman (once rumored to have been in talks for The Dark Knight Rising) in the film.