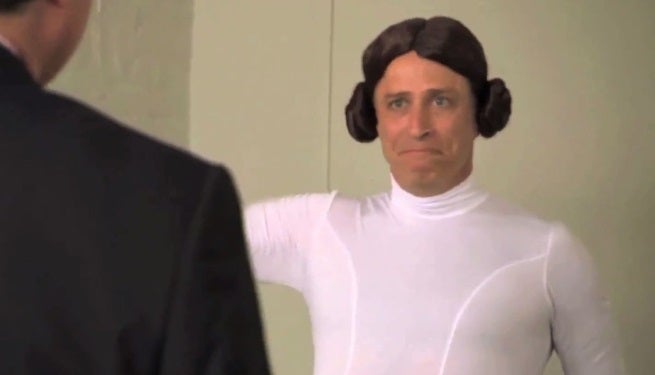 Jon Stewart, host of The Daily Show, held an "ask me anything" session on Reddit today, in order to promote his directorial debut film, Rosewater.

So it was a little random when user tomhanks_wizkhalifa asked him about question about Star Wars:

Help me Jon Stewart, you're my only hope. In Episode IV, How did the Dianoga, or trash compactor monster, not get crushed? Are we to assume he was birthed in the trash compactor or was placed there?

Also you are the voice of a generation, media icon, yada yada yada...

What might have been even more surprising was how well prepared Stewart was to answer the question:

It's an excellent question.

What I believe occurred is within those compactors, you can generally find some corroded areas, where a small compactor-monster - a baby, if you will - could find respite.

My guess is through the years he had worn that small opening into a home den. And had been trained in a skinnerian fashion to retreat to it, upon hearing the giant grinding gears of the compactor kicking in.

I can't prove it, but in my heart, I believe it to be true.

So, Stephen Colbert got his cameo in The Hobbit. What's it going to take to get Stewart a cameo in Star Wars?