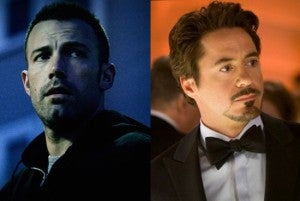 There has been a lot of speculation on the Internet as to why Ben Affleck would want to play Batman. After all, Ben Affleck has become one of the most successful directors in Hollywood, so why would he want to take the Internet abuse that can sometimes come with being cast in a superhero role? Earlier today, we brought you a report on how director Kevin Smith, who is a good friend of Affleck, talked about how much Affleck loves the character of Batman. But Smith, who admits that he hasn't talked to Affleck since the announcement, also had another explanation as to why he thinks Affleck took the role In his Hollywood Babble-On podcast, Smith said, "This would be my speculation. This is what I would imagine. You go up to an eight year old kid, and you say, 'Who's Robert Downey Jr.?' They go, 'Iron Man.' If you go up to an eight year old kid, and you say, 'Who's Ben Affleck?' They look at you blankly or they say, 'Argo-f***-yourself.' There's just not the same connection there." Smith continued, "And so if you look at Robert Downey Jr.'s brilliant career over the last ten years with all these Marvel flicks, he went from a dude who's sort of considered tarnished goods at one point to a couple films of respectability, and then suddenly he was the lynchpin of a new universe of the Marvel films. He became the beacon, all that charm, all that training, his entire life of being Robert Downey Jr., being a charming actor and s***, boom, came into bear with that f***ing character. Same thing is going on with him [Affleck]. I imagine he looks at it like, 'I could probably Robert Downey Jr. this. I don't have to f***ing direct this. I'm just an actor in this movie. It's Superman and Batman. It's not Batman alone. There's going to be lots of help.' Who the f*** is not going to see the movie? That's my thought. If you're Ben Affleck, you're going, 'Ok, I've got to eat s*** for what, a month on the Internet, and take it from a bunch of people.'" Even if Affleck winds up taking heat for two years straight until the movie comes out, Smith points out, "2015 happens, Superman Vs. Batman makes two billion easily. Why wouldn't you want to be Batman in that? Somebody's going to be Batman. Why not you? He believes he can do a good job. He's not sitting there going, 'I can't wait to f*** this up. Can you please make the villain the Jay-loker?' That already happened one time. I'm telling you, he will not drop the f***ing ball." As far as everything that is currently being said about Affleck on the Internet, Smith said, "He can take it. This is a dude who took being kicked in the teeth for a long time. I doubt he's even paying attention to the stuff on the Internet." Smith also said, "His movie won best picture last year, just this year. This is a dude, who's been to the bottom, then to the top. I know him, I don't think he's looking for a return to the bottom."