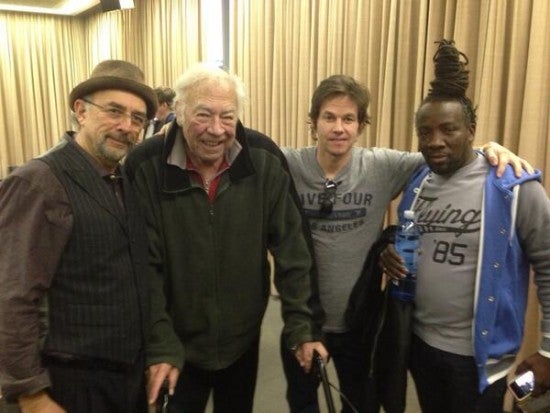 's Mark Wahlberg and Cool Hand Luke's George Kennedy will join Man of Steel's Richard Schiff in an as-yet-unidentified movie that is apparently in production now. Schiff tweeted a photograph of the three, and a fourth man not identified by the caption but who appears to be Rasta Phil, "the first celebrity" Wahlberg ever saw in person, saying that they were doing a table read for Schiff's next movie. Kennedy doesn't have anything currently listed as in production on his Internet Movie Database page, while the IMDb pages for both Schiff and Wahlberg are full of upcoming films--but nothing where the pair are listed together. In all likelihood, Schiff has been cast in one of Wahlberg's movies without notice and will be announced or revealed soon, since it would be harder for an actor with Wahlberg's box office draw to have a new project come up, or to join one of Schiff's, without anyone becoming aware that it was happening.

Table read for next movie with #markwahlberg and the legendary #GeorgeKennedy pic.twitter.com/JYf1moNEXT — Richard Schiff (@Richard_Schiff) January 11, 2014

With more than 200 film and television appearances to his credit, Kennedy started his career largely playing authority figures, military men and the like. The World War II veteran is probably best known to younger audiences for his work on The Naked Gun movies, in which he played Ed Hocken. His character, Dragline, teed up Paul Newman to deliver the title line in Cool Hand Luke, though:

: [After Luke wins a poker game by bluffing] Nothin'. A handful of nothin'. You stupid mullet head. He beat you with nothin'. Just like today when he kept comin' back at me - with nothin'.Luke: Yeah, well, sometimes nothin' can be a real cool hand.