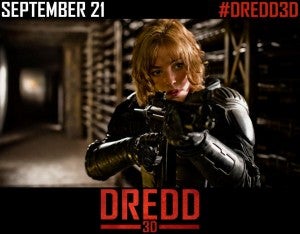 Last week, we got a final theatrical poster for Lionsgate's Dredd 3D, an image that focused solely on Judge Dredd himself as he stood atop a flaming skyline. Today, though, with just over a month to go before the film's September 21 release, Lionsgate has released another new banner poster focusing on Dredd's partner, Psi-Ops Judge Anderson, played in the film by Olivia Thirlby. Thirlby, who is best known for her role opposite X-Men 3 star Ellen Page in Juno, will appear next in Nobody Walks, out this weekend.