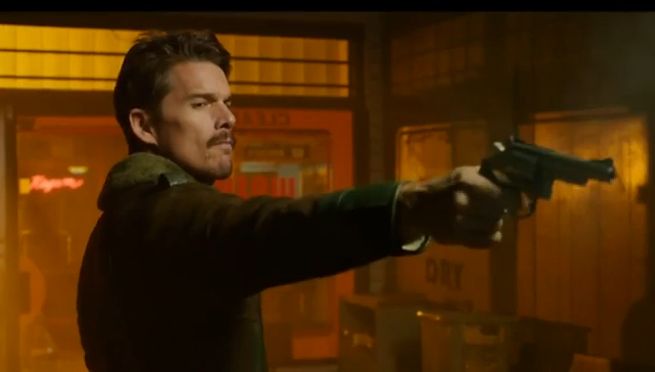 Once upon a time The Spierig Bros. were attached to direct a Dark Crystal sequel that, like pretty much every other Jim Henson Co. feature film, never came to be. A shame, though, because they've got just the right skills for that kind of picture. They're experts at world building, as demonstrated by their films Undead, the reverse vampire thriller Daybreakers, and now - from the looks of things - the time travel thriller, Predestination.

Actually, they're building more than one world here, with very distinctive settings required for the different time zones. Some people have said this film looks like a cheaper knock off of Looper, but I don't think that's fair at all.

Ethan Hawke did well in Daybreakers so it's no surprise that he and the Spierigs got together again. Looks to me like he's got a lot of fun things to do here.

Predestination is based on Robert Heinlein's short story _All You Zombies_ - complete with those _ marks, that's no typo - but it's obvious that some elements have been changed. Have they kept the big, big twist in place? Oh, I really hope so. It's a humdinger. Do yourself a favor and don't look it up.