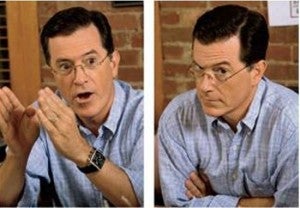 Not since the rumor spread that Spider-Man was going to appear in The Avengers have we heard a rumor this unusual. It turns out that American political satirist Stephen Colbert might be appearing in The Hobbit. And the source of the rumor is none other than Stephen Colbert himself. In the November issue of Playboy, which just arrived on newsstands, Eric Spitznagel interviewed Stephen Colbert. When asked if he visited the Hobbit film shoot in New Zealand, Colbert said, "I did. [Director] Peter Jackson invited me to the set last year. I flew out and watched them shoot some scenes and went to some locations. I saw a 25-minute cut, and it was amazing. Jackson knows I'm a big fan of the films." Now here is where it get interesting. Colbert was asked, "You flew out to New Zealand just to watch?  He didn't hire you as an extra or something?" According to the Eric, Colbert at first just smiled, but then Eric asked, "Are you telling us you're in the Hobbit movie?" To which, Colbert replied, "Could be."