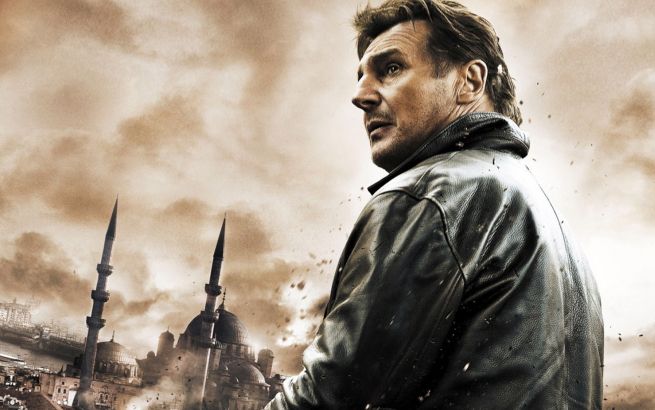 Taken 3 is the third installment to a franchise that could have been a classic if it ended with the first one. Instead, the powers that be decided to make a sequel that mimicked the premise of the first one and threw Liam Neeson on screen doing what we now know him to do best- finding people, and killing them.

The third time around, though, we are introduced to what could basically be a standalone film, especially considering that these films do not exactly thrive on character development. In fact, this time, no one is even, "Taken," but neither was I.

We jump into Bryan Mills (Liam Neeson) trying to make amends to his family, because risking his life and saving theirs, twice, apparently is not enough for a daughter, Kim (Maggie Grace), to want her daddy around. His ex-wife, Lenore (Famke Jansen), seems to be coming around though. Her marriage with Stuart (Doughy Scott) is on the rocks and she's suddenly realizing what she once had in Bryan. Bryan, though, the stand-up guy that he is, avoids getting involved out of respect for her husband.

It was during a meeting between Bryan and Lenore within the first few minutes of the film that I thought we were going to jump right in, based on having seen the trailers. This was not the case. Instead, we learn about Stuart having a difficult time accepting the fact the his wife is hanging around with her ex-husband, even if it is because they share a daughter or he ridiculously saved their lives twice. Nonetheless, Bryan agrees to stay away from Lenore.

It's the next day when the ball starts rolling. Bryan receives a couple text messages from Lenore, urgently and sincerely asking to meet and have bagels, which Bryan interpreted as going to fetch bagels and returning to his apartment where Lenore would be waiting. How he knew this or this was implied is just one of the many questions I have for the writers (Luc Besson and Robert Mark Kamen) of this film. Nonetheless, Bryan returns home with his bag of fresh bagels, only to find a trail of blood and murder weapons leading to Lenore's body with a slashed throat on his bed.

Cops suddenly rush in and attempt to arrest Bryan for the Lenore's murder. Bryan could surely prove it wasn't him, there's a murder weapon that would probably be loaded with finger prints and he has fresh bagels and a girl from the bagel store who could confirm where he was, but then we wouldn't have an unbelievable action packed ride ahead of us. So, Bryan does his super ninja spy stuff to these two officers (doesn't kill them, only leaves them unconscious) and begins his escape from authority and hunt for Lenore's true murderer.

The rest of the way, we're taken on a roller coaster that at one turn has the same action we've seen in the previous installments but with a new backdrop and at the next turn a couple of plot twists that I felt were predictable but some may find mind-blowing if they mistake true character intentions for bad acting.

My biggest problem with this film is not what we've seen before. The plot is actually a refreshing entry into the Taken franchise. My problem is with director Olivier Megaton. The cinematography was in some cases poorly focused and at others nauseating. We all know the trick to fight scenes and car chases are quick pans, zooms, shaky cameras, and rapid cuts. The rapid cuts in this film were one thousand too many. It was hard to keep track of what was going on in too many cases. I don't remember watching any of his other movies and thinking this- I actually quite enjoyed Taken and Colombiana.

The next problem is that Bryan Mills is practically invincible. Now, I know that if the character dies in the first act you don't have a movie and we're all here to watch the Liam Neeson show, but at least make it remotely believable. Some of the events Bryan survives, the car crashes he escapes, and the gun fights he evades are almost laughable. Thankfully, Liam Neeson is able to breathe life into the scenes, though.

Having said all of that, I need to point out one of the new characters to the franchise- Franck Dotzler played by Forest Whitaker. Dotzler is a meticulous detective assigned to bring Bryan Mills in for the murder of Lenore (and all the other crimes he is committing while evading arrest). Forest Whitaker brought the character to life in a way that I credit solely to him and not to direction or writing. I wish there would have been more of a relationship between Dotzler and Bryan. In fact, I think they were only on screen together for less than five minutes. I would even take a spin-off movie where we see Dotzler and his team of unnecessarily knuckle headed cops take down bad guys in Los Angeles.

Bottom Line: Taken 3 delivers a stimulating and different story to the franchise, but combines it with unbelievable and poorly presented action sequences (however entertaining they may be). 5.9/10

After credits scene: No