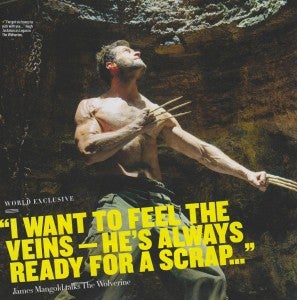 In case there was any doubt, comparing the image released by Empire magazine earlier today with other production stills taken by amateur photographers on the set of The Wolverine this summer seems to indicate that the scene pictured, in which Wolverine has bone claws rather than his traditional adamantium, takes place in the past. While filmmakers made clear that the film is not a prequel, but actually takes place after every X-Men film that's been made so far, The Wolverine features some sequences that are either flashbacks, or part of the film is set in the past before the main story kicks off. Over at Bleeding Cool, Brendon Connelly implies that he knows much more about The Wolverine than most of the rest of us do--and he can't say much. But what he does say? 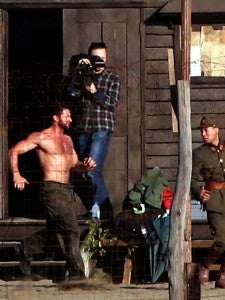 "Wolverine's not getting bone claws back, nor is this new film set before the Singer originals. Now… look at Wolverine's trousers in the above picture, look back over some of our previous coverage of the film and do the maths yourself." And he's right--looking closer at old shots from the set, it appears that the green pants/no shirt combination Jackman has going on in the photo above is one he's sporting during World War II, when Logan apparently spends some time at a prisoner of war camp in Japan. That first stint in Japan may be a framing device, something used to give a little context and continuity since this feature is totally out of whack with the timeline proposed by X-Men Origins: Wolverine and a trip to Japan figured into that movie's conclusion...but The Wolverine is not a direct sequel to that film. You can see Logan doing what appears to be a full-on sprint through the POW camp, from this still grabbed in August. And certainly the wardrobe does look similar.

The Wolverine: Bone Claws Are In a Flashback